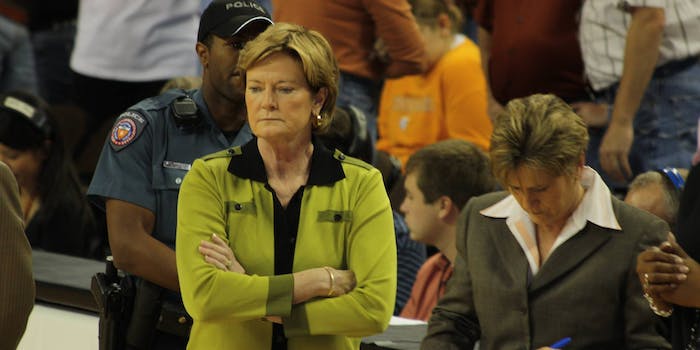 Everyone from Obama to Mia Hamm spoke out.

Pat Summitt, the trailblazing former University of Tennessee women’s basketball coach who holds the most wins in NCAA history, died Tuesday after a battle with early onset dementia. She was 64.

Over her 38-year career, Summitt helped put women’s basketball on the map and inspired an entire generation of female athletes both on and off the court. She coached for Tennessee from 1974 to her retirement in 2012 and won eight NCAA championships, logging nearly 1,100 wins.

Summitt’s son Tyler highlighted the relationships she built and fostered outside of basketball, not just her career on the court.

“She’ll be remembered as the all-time winningest D-1 basketball coach in NCAA history, but she was more than a coach to so many—she was a hero and a mentor, especially to me, her family, her friends, her Tennessee Lady Volunteer staff and the 161 Lady Vol student-athletes she coached during her 38-year tenure,” Tyler Summitt said in a statement.

As more people learn of Summitt’s death, those who knew or were inspired by her are passing along their condolences, demonstrating just how profound an effect she had on the players she coached and other female athletes in particular.

Not many people make an impact in the lives of others the way Pat Summit did. Thank you Pat.

Patt, I Always wanted to play for u as a kid, But I'm Glad that I still am able to be apart of the legacy u built! 🍊 pic.twitter.com/gGnGcoQWgW

Pat Summitt was a true pioneer in every sense of the word. One of the Greatest of All Time to… https://t.co/EV1jS1pfAl

Thank you Pat Summit for all you have done to inspire women to be their best self. This generation of women are forever changed b/c of you.

Girls play on the playground now with the boys b/c of her – RIP to 1 of the greatest EVER! Pat Summitt #Legend The first lady of basketball

Lengthy statement from President Obama on the death of Pat Summitt: pic.twitter.com/gMMjeY7kof

Summitt’s family will be holding a private service and burial. A public celebration will be held at the Thompson-Boling Arena in Knoxville, Tennessee. Details are still being finalized.