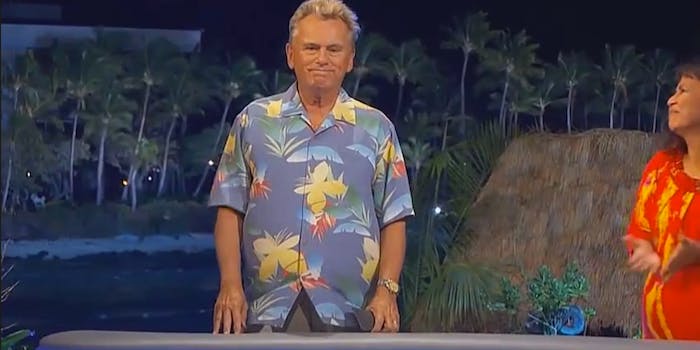 "Who said anything about a horse?!"

After three decades of hosting Wheel of Fortune, Pat Sajak has certainly seen it all. As contestants see words that aren’t even on the board and solve puzzles with a single guess, Sajak has always managed to keep his cool like the consummate professional he is.

That ended on Monday night, when the contestants’ guessing spree got the best of the host. It began innocently enough: two players were trying to figure out what four words would solve the answer to the puzzle entitled “What Are You Doing?” By the end of it, Sajak had stormed off the set.

Don’t let his Tommy Bahama Hawaiian shirt fool you—Sajak has no time for your horsing around, Mitch and Lee.

In all fairness, “Riding a brown horse” was a pretty decent guess, but far off from the correct answer, which was “seeing a buddy movie.”