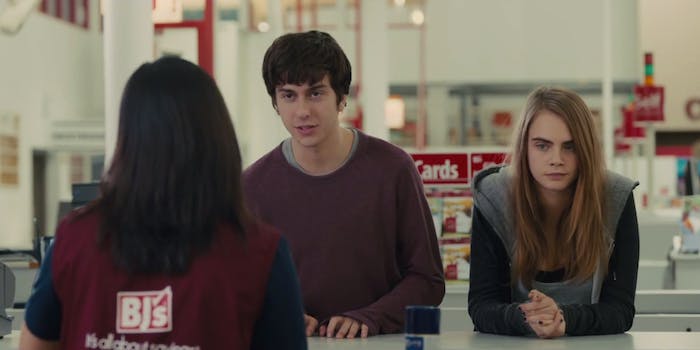 Here’s the ‘Paper Towns’ trailer you’ve been waiting for

'It's a paper town. Paper houses and paper people.'

The roadtrip to the first Paper Towns trailer is finally complete.

In trying to glimpse a first look at the next John Green book to be adapted to screen, we went on a whirlwind journey through social media, from USA Today to star Nat Wolff’s Twitter and Cara Delevingne’s Instagram to Snapchat, before ending up with Green debuting the trailer on Today.

In the @TODAYshow green room getting ready to debut a clip from Paper Towns. Full trailer in 30 minutes. GAHHH. pic.twitter.com/1sZAP58GSY

We already knew from the past reveals that we would be seeing a lot of Q and Margo’s night of seeking revenge, and true to the previews, we see even more of that here. But for the first time, we’re getting a look at the rest of the supporting cast and even the movie’s plot and major mystery (but none of the black Santas). It’s as much about friendships as it is romance—maybe even more so.

Margo may be Q’s “miracle,” but he, just like the rest of us, will have to learn to look at them more complexly.