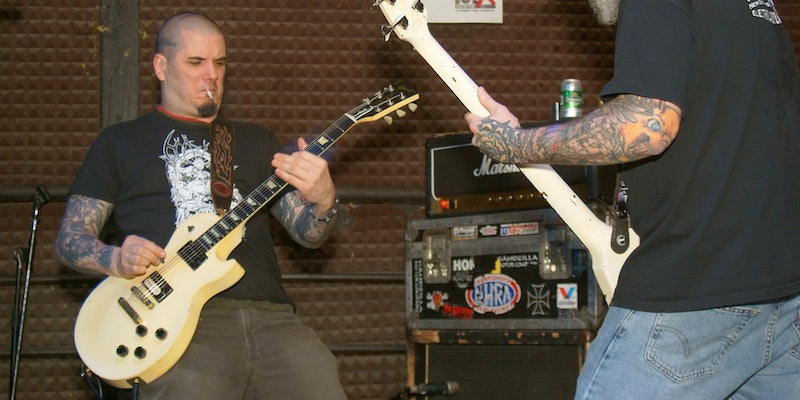 Is Phil Anselmo a racist?

Phil Anselmo is the lead singer of the now-defunct heavy metal thrash group Pantera, and he might or might not be a racist. That’s depending on whether you believe his latest explanation for why he was giving the Nazi salute and yelling “white power” at a show last week to honor the memory of late Pantera guitarist Dimebag Darrell.

So, yeah, that doesn’t look good. But here was Anselmo’s explanation. Commenting on the YouTube video under the handle Housecore Records, Anselmo writes, “Ok folks, I’ll own this one, but dammit, I was joking, and the ‘inside joke of the night’ was because we were drinking fucking white wine, hahaha… Of all fucking things. Some of y’all need to thicken up your skin. There’s plenty of fuckers to pick on with a more realistic agenda. I fucking love everyone, I fucking loathe everyone, and that’s that. No apologies from me. PHA ’16 “

This isn’t the first time Anselmo, who’s currently the singer of the group Down, has been accused of racism.

In March 1995, during a Pantera show in Montreal, the then 26-year-old Anselmo told the crowd that while “Pantera are not a racist band” and that he and his bandmates had friends “of all colors and all kinds,” he had a problem with rap artists “pissing all over white culture.” Furthermore, Anselmo continued, pleas from the African-American community to end ‘Black on Black crime’ should be interpreted as “it’s okay to kill white people.” white people, the singer insisted, needed to take more pride in who they are.

The singer later apologized for his rant, and the “harmful words that may have racially offended our audience,” but the controversy dogged him for years. In recent years, in his more reflective moments, Anselmo—a thoughtful man, for all his bullish, anti-intellectual John Doe bravado—was not slow to acknowledge the power of symbolism and speech to propagate hatred and division.

But Anselmo’s explanation isn’t good enough for Machine Head’s Robb Flynn, who posted his own video in response. Though he admits to throwing around the N-word in his past, Flynn eviscerates Anselmo.

Either way, here’s hoping Anselmo doesn’t make a spectacle of himself again and instead just focuses on selling the least heavy metal products he can possibly hawk.