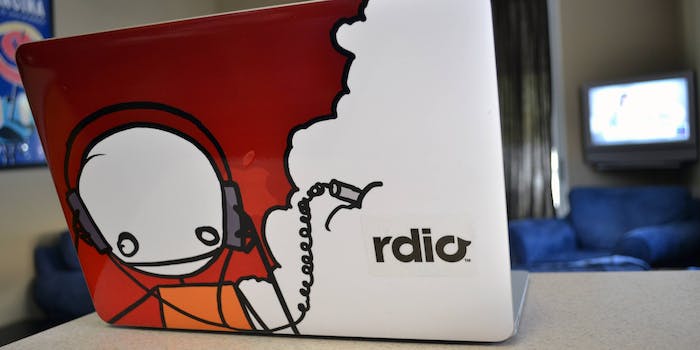 Pandora will acquire Rdio for $75 million

Pandora set to purchase all assets of the streaming music service.

A deal quietly negotiated for several months has now been closed, and announced to the public: Rdio will close its curtains, and hand its assets—both intellectual and technical—to Pandora for a cool $75 million. In short:

Pandora is buying @Rdio for $75 million.

Though it never gained the name recognition of Pandora in the U.S., Rdio’s streaming music service operates in more than 100 countries, and was valued at $500 million in 2013. Like Spotify, Amazon Music, and the recently launched Apple Music, Rdio offers on-demand streaming in addition to an online radio option. Unlike those other companies, Rdio’s profits have slumped over the past couple years, as it’s been unable to build a competitive subscriber base.

While Pandora has remained a dedicated Internet radio service since its 2005 launch (after many years of developing the Music Genome Project algorithm that powers the service), the company is now aiming to grow—and it isn’t wasting time in doing so. In early October, the company purchased Ticketfy—looking to streamline the process of hearing a band and seeing them perform—and announced a deal with Sony’s music division last week.

Pandora hopes the assets acquired from Rdio will aid in its international expansion. (Pandora is available in three countries—a small number next to Rdio’s.)

Brian McAndrews, Pandora’s CEO, described the state of the company as being “step one” during an investor call that followed the acquisition announcement, made moments after the market’s close on Monday. McAndrews aims to make Pandora a one-stop shop for online music, offering a full-on subscription service that covers “radio, on-demand, and live music” by late 2016.

The company’s fiercer, more aggressive focus on expansion is likely tied to the nearly 50-percent drop in stock value that occurred immediately after a subpar earnings report was released. While Pandora is a household name, it’s looking like its name alone won’t keep it afloat among services that are miles ahead in terms of offered features.

Pandora’s name recognition, when added to the features offered by the privately owned Rdio service, might be enough to keep the company in the same league as its competitors.

Unfortunately for Pandora, the individual contracts between Rdio and the music labels that provided the on-demand songs for the service will not transfer with the acquisition. Pandora still relies on interactive music licenses.

Rdio appears to be downplaying the news.

While Rdio’s CEO will not be joining Pandora, Variety reports that Pandora is offering jobs to a great deal of Rdio’s soon-to-be defunct team.