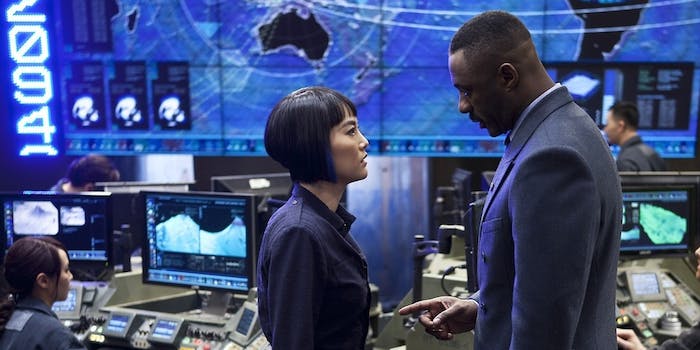 Hopefully it'll be worth the wait.

Pacific Rim 2 is definitely happening! Although sadly not until April 2017.

Director Guillermo del Toro announced in a YouTube video that once he wraps up his current project, a gothic romance movie with Tom Hiddleston and Jessica Chastain, he’ll start work on a Pacific Rim animated TV series and movie sequel.

Even before Pacific Rim came out, its success (or lack thereof) was being followed closely by people in the film industry. Superficially speaking, it seemed like obvious blockbuster fare: photogenic actors, giant killer robots, and apocalyptic battles. However, there were a few details that were considered to be oddly rebellious when compared to the current summer movie landscape. It wasn’t an adaptation or sequel, two of its three main characters were people of color (Mako Mori was kind of a big deal), and instead of being a grimdark angst-fest, Pacific Rim’s emotional arc told a story of friendship and optimism.

Pacific Rim received a positive response from sci-fi and action movie fans who were sick of gritty reboots and boring white guy protagonists. The only problem was, the film saw a far better box office performance overseas than it did in America, so it wasn’t clear whether a sequel would happen or not.

This sequel announcement is good news all round, and the three year gap between now and its release will be cushioned by the animated TV show and some new Pacific Rim spinoff comics.

The script will be co-written by Zak Penn, who previously worked on The Avengers and X-Men 2, and Del Toro confirmed to Buzzfeed that the original cast would be returning for the new movie.