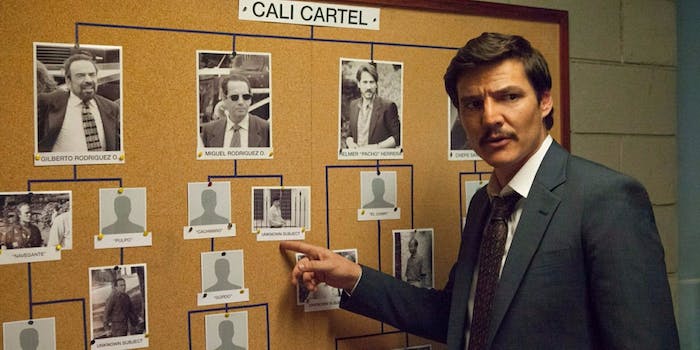 'If we don't receive it, we will close their little show.'

The only thing more exciting than season 3 of Netflix original series Narcos is the drama surrounding the filming of season 4—and the real life brother of Pablo Escobar wants in on the action.

Season 4 will move viewers from Colombia to Mexico, where the plot will focus on the Juarez cartel. As Netflix begins preparations to film, more Escobar family members have said they do not condone the TV series.

Roberto De Jesus Escobar Gaviria has reportedly demanded $1 billion from Netflix for “unauthorized usage of content.” In an interview with the Hollywood Reporter, Gaviria warned Netflix it was a bad idea to film in Mexico without his consent.

“I don’t want Netflix or any other film production company to film any movies in Medellin or Colombia that relates to me or my brother Pablo without authorization from Escobar Inc.,” he said. “It is very dangerous. Especially without our blessing. This is my country.”

Gaviria—who was once known as the “chief of the hitmen”—appears to be correct in his assessment of the danger that filming in Mexico could pose. On Sept. 11, Netflix location manager Carlos Munoz Portal was shot and killed while scouting for locations in a rural area outside of Mexico City.

“If you have the intellect, you don’t need to use weapons,” said Gaviria when asked about the recent death. “If not, you have to. In this case, Netflix should provide hitmen to their people as security.”

Narcos watchers on Twitter shared their unease about the threats from Gaviria.

If I'm on the Narcos show I'd quit. I ain't getting killed so people can binge watch

Narcos producer shot and killed in Mexico…..these cartels don't want to be exposed on netflix smh

Gaviria also warned there will be consequences if Netflix doesn’t pay Escobar Inc. the $1 billion.

“Right now, we are in discussions with them through our attorneys Browne George Ross LLP to obtain our $1 billion payment,” he said. “If we don’t receive it, we will close their little show.”