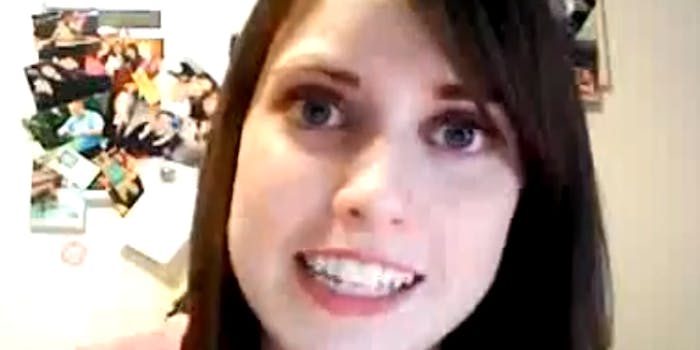 YouTuber wzr0713, better known around the Web as Overly Attached Girlfriend, isn’t ready to let go just yet. She’s back with a new video that’s just as creepy as her cover of Justin Bieber’s “Girlfriend.”

The video is similar to her viral hit in that it features the doe-eyed girl staring intently into the camera (and your soul) as she sings a rendition of Carly Rae Jepsen’s “Call Me Maybe.”

So far the video has collected more than 1.8 million views since it was posted Monday.

Overly Attached Girlfriend became Internet famous on June 7, after her hilariously unsettling fan video for Bieber’s “Girlfriend” spawned hundreds of memes. The video was submitted on YouTube for a contest to be featured in a commercial for Bieber’s new perfume, aptly titled “Girlfriend,” due out on June 21, the New York Times reported. The contest is part of a $20 million social-marketing campaign harnessing Bieber’s influence on YouTube, Twitter, and Facebook.

On social news site Reddit, the new video creeped out (and enamored) more than 3,000 people, inspired one redditor to find out exactly how many times she blinks, and got novelty account shitty_watercolour to paint her portrait.

“The comments are creepier than the video… Kudos, Reddit,” kenz101 noted.

The Daily Dot has reached out to Overly Attached girlfriend for a comment.  We’re not sure we want to hear back.