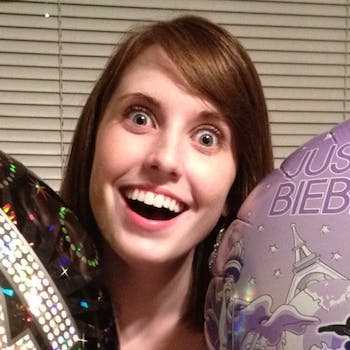 Laina, the Overly Attached Girlfriend, held a successful AMA ("Ask Me Anything") on Reddit after site moderators cut her first attempt short.

After having her first “Ask Me Anything” session shut down by the moderators of the Reddit subsection r/IAmA on Sep. 13, Laina Morris— known on the Internet as “Overly Attached Girlfriend”—decided to give it a second go.

This time around, the Q&A session occurred on r/AdviceAnimals, the Reddit section dedicated to Internet memes and image macros. In her popular “AMA”— which garnered over 2,000 upvotes and 5,168 comments— Laina talked about becoming an instant celebrity, explained how her life has changed for the better, and even gave her opinion on how she prefers her toilet paper to hang.

How did you first feel when you first saw you became a meme and how do you feel about it now? You seem to have embraced it rather than cry about it which is nice to see. :) EDIT: Oh and how does it feel knowing that half of reddit fancies you? Teehee * giggles * (RichB93)

Well the first time I saw it was the day after I posted the video on Youtube… that was the day my video got 1,000,000 views, Bieber’s manager tweeted it, it showed up on Tosh.0’s blog, and the first meme appeared. With all of that happening at once, it felt pretty surreal. The meme was probably the biggest thing to come from the video, and I think it’s awesome. Sometimes creepy seeing my face everywhere… but mostly awesome. And hilarious.

How does it feel knowing that plenty of guys wouldn’t mind you being overly attached to them ;) ? (Bersz_wondering)

Makes me wonder if they’ve seen the meme. Or the video. And if so… very, very concerned.

Are you gonna try to go farther in your internet fame and become a actress of any sort? (Spopling)

I would love to, but it’s difficult. I’ve always wanted to somehow get into the entertainment industry before any of this happened, but I never really saw it as a possibility. Now that is IS a possibility, it’s very difficult to go about moving forward without people thinking I’m milking my 15 minutes. But I love to make people laugh and however I could continue to do that would be awesome (writing, acting, whatever).

which do you prefer, having the toilet paper hanging up or hanging down? (noxhawk)

Laina, will you go to prom with me? This question is completely serious. There will be heart break and many days of sadness if you say no. (APOLARCAT)

That completely depends on the quality of your dance moves.

How have your friends reacted to you becoming a meme? Has it noticeably impacted your day-to-day interactions with people at all? I know you obviously have a lot of fans that come up to you, but do people in general treat you differently? (Amateur_Superhero)

My friends think it’s awesome… my close friends don’t really think much of it anymore. It’s kind of just become normal for all of us, but in the beginning I had a lot of friends sending me memes and stuff they’d find on the internet that they thought was funny.

I’d say the biggest change as far as my interactions with people is not feeling like I can make new friends (at least in the city I live in). As I’ve said before, it’s rare that I get recognized anywhere else, but it happens all the time where I live. And, while that’s awesome, it’s made me very cautious when meeting new people. I guess it’s kind of hard to explain, but it’s definitely changed my day-to-day life.

“I don’t mind overly attached, but she’s kind of a dick.” (feaureau)

“I’m extremely sarcastic. I guess sometimes that comes across as being a penis.” 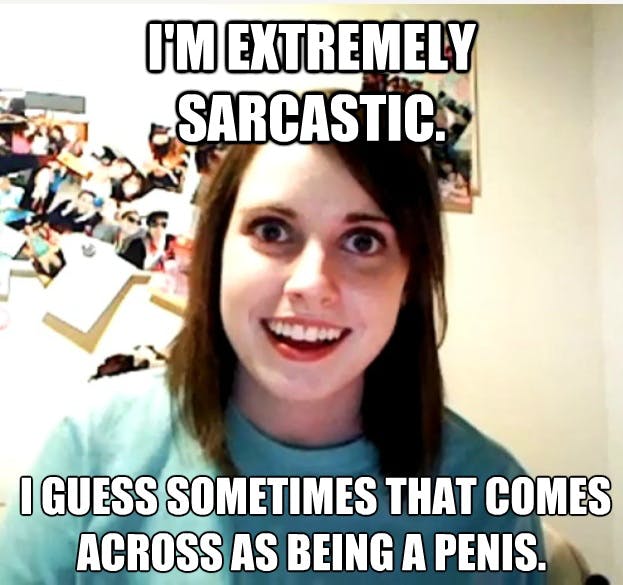 I’m glad to see how you’re embracing your memehood! How different is it to be approached by random people who know of your OAG character? Do you wish they knew you for you? Unless, of course, your real self IS OAG… And the usual: Would you rather fight 100 duck sized horses or a horse-sized duck? (ganonthesage)

Well it’s definitely weird, and it’s obviously something I’ve had to get used to… but for the most part it’s very cool. I’m not a celebrity at all, most people have no idea who I am, and it’s rare that I get recognized outside the town I live in… but to be able to make someones day just by talking to them or taking a picture – that’s something I’ve never been able to do for people before and it makes me feel good. I just think of it this way: if I were to run into someone I knew from the internet (or TV, movies, whatever), and I really wanted to meet them, how would I want them to act? And I act that way.
…horse sized duck.

Does the change in your day-to-day life make you regret posting the original video? (Skymt1)

Not at all, my life has definitely changed, but for the most part it’s changed for the better.