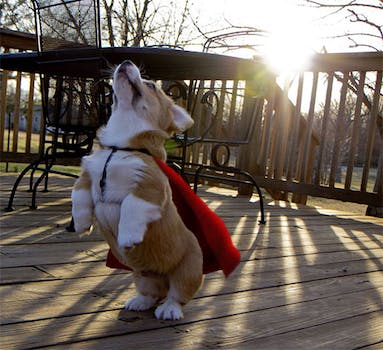 Look! Up in the Tumblr! It’s Otis the Corgi!

Who wouldn't reblog a dog with such heroic powers?

After living with chronic fatigue syndrome for 12 years, Tumblr superhero Benjamin “Frogman” Grelle might have finally found a cure.

It comes in the form of a four-legged, furry sidekick named Otis.

“He’s made a huge impact on my happiness, and I think seeing his antics on the Internet makes others happy too,” Grelle told the Daily Dot about his new puppy.

And by “others,” Grelle means the more than 4,800 people on Tumblr who have liked, reblogged, and commented on a Photoshopped photo of the dog standing on its hind legs, altered to add a superhero’s  cape.

The image has since achieved meme status, reaching the front page of Reddit today where is collected more than 100 comments from people praising the pooch, showing off their own memes, and sharing their corgi adventures.

“My corgi once wore a cape and tripped on it and fell down the stairs,” wrote sealcouch. “Three years later, he still won’t go down stairs.”

Grelle purchased the dog from a “very lovely older couple from Alabama” who had two dozen corgis prowling around their house. He came up with the name Otis after hearing Otis Redding’s “(Sittin’ On) The Dock of the Bay” on Pandora. While the dog gives Grelle “the warm fuzzies,” it also causes a few headaches, he said.

“They have tiny bladders and you have to take them out very often,” Grelle said. “Plus I walk him  three times a day. This is especially hard for me due to my Chronic Fatigue Syndrome. My back and ankle tend to hurt. But it’s all worth it.

“He motivates me to get exercise, he is better than an antidepressant, and just showing pictures and videos of him makes loads of other people happy. The experience has been fantastic.”

While Grelle is proud of Otis’ new found Internet fame, he has even bigger plans for his puppy.

“I want Otis to be the next Maru,” he said. “I think he would make a great Internet ambassador. I just have to teach him how to jump into boxes.”