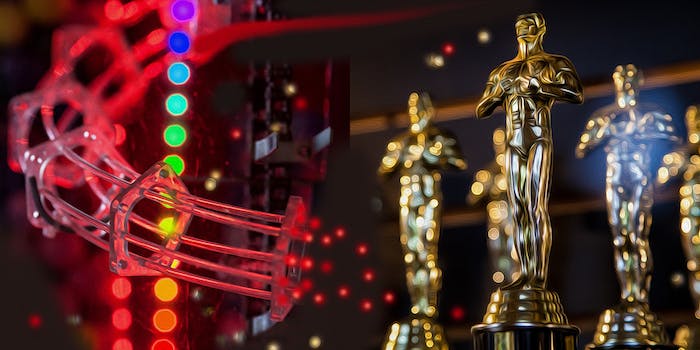 All of the acting Oscar nominations are white again

The #OscarsSoWhite backlash is here.

Amid reports that Oscar voters feared a repeat of the #OscarsSoWhite backlash they received last year, giving due to some of the great performances by people of color this year felt like a no-brainer. But after Thursday morning’s announcement of the latest nominations—not so much.

We saw some first-time nominees as well as some repeats among the 20 actors and actresses nominated for major acting awards, but as was the case last year, every person nominated was white.

As people expected (and the Academy likely feared), the backlash was swift as people used plenty of metaphors to describe the state of the nominations. One person even made the point that all of the Best Actress nominees could easily be the same person.

What do you *mean* there's no diversity at the Oscars? #OscarNoms #OscarsSoWhite pic.twitter.com/KJJwX1qn6g

The #Oscars this year looking a lot like a Trump rally. All White.

When it comes to racial & gender diversity, television is so far ahead of movies that it's bizarre. & a lot of that is about the last 5 yrs.

The Best Actress nominees literally all look like the same woman at different stages of her life pic.twitter.com/o7zu8wUf0R

As April Reign, the managing editor of BroadwayBlack.com, noted, the lack of diversity among all of the Oscar nominations (not just the acting categories) is even worse than it was last year when she started the now-viral #OscarsSoWhite hashtag. (Reign could not be reached for comment.)

A five minute opening by brilliant Chris Rock will not make up for over 80 years of erasure of marginalized communities. #OscarsSoWhite

The lack of diversity among the nominees, both in front of the camera and behind it, is a huge factor for fans and critics, especially when they felt there were plenty of worthy candidates throughout the past year. The biopic Straight Outta Compton, which received an Original Screenplay nomination, was critically acclaimed with praised performances. Idris Elba, who received a Golden Globe nomination for his role in the Netflix film Beasts of No Nation, was passed over for other actors. Will Smith, nominated for the Golden Globe for Concussion, was also snubbed.

And while Sylvester Stallone received a Best Supporting Actor nomination for reprising his role as Rocky Balboa in what some critics said was the best Rocky movie since Rocky, star Michael B. Jordan and director Ryan Coogler were both passed over. It’s their Creed, which appeared on numerous “best films of 2015” lists, that especially stung with fans.

I can't wait until Michael B. Jordan gets nominated for reprising the role of Creed when he's 70.

In terms of race: For men, be mad for Ryan Coogler, Michael B. Jordan, Jason Mitchell, Idris Elba. For women: Be angry I can't make a list.

This year Eddie Redmayne was nominated for portraying transgender pioneer Lili Elbe in The Danish Girl while Tangerine, which stars two trans women of color, was snubbed in the acting categories. Even if Redmayne ultimately loses on Oscar night, the viewers still remember.

No love for Tangerine stars? Where's Will Smith? Why is the breakout star of 'Creed' a white dude? #Oscars still feel pretty….#Oscars2016

Oscar host Chris Rock, who penned an essay in 2014 calling Hollywood a “white industry,” will almost certainly address the lack of diversity among the nominees when the awards air Feb. 28. But for those calling for more diversity among the actors and filmmakers being recognized and awarded, it likely won’t alleviate the sting of #OscarsSoWhite all that much.

There are some incredible performances here but you cant tell me this is what America looks like in 2016. #OscarNoms pic.twitter.com/THnCw9UpjJ