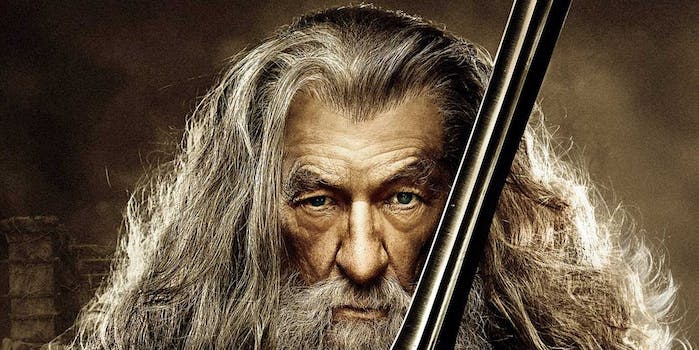 In a downloading mood?

In the latest battle between Hollywood and pirates, the pirates are winning.

As a result, torrents of Oscar-nominated DVD movie screeners are hitting the Web in waves.

Major movie studios have been forensically marking their content with watermarks for years so they can “identify sources that make it available or download it.” Penalties have hit as high as a year in prison for leakers in cases where they’re caught due to watermarks.

Now, movie pirates have figured out how to erase the watermarks, TorrentFreak reported. The latest Peter Jackson film, The Hobbit: The Battle of the Five Armies, has shown up from the CM8 release group with a note about the defeated watermarks:

First real Screener of this Year!!!
got you First and Second Part, now its time for Part Three! Have FUN!
A bit later than last years, but better late and safe than sorry.
Last 2 weeks have been hell, searched all over for Hobbit day and night.
Movie had Watermarks visible and invisible ones, had to remove frames to get rid of them.
Nothing i havent done before, It was hours of work, but its finally done and here for you to get!

The newest Hobbit film was downloaded more than 500,000 times in the first day, while almost all the other Oscar nominees—including The Gambler, Inherent Vice, A Most Violent Year, and Kill the Messenger—have hit the torrents and been shared rapidly in the last week or two.