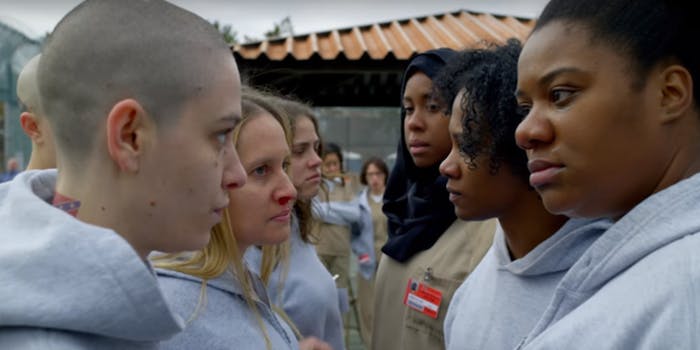 Season 4 ends on a heartbreaking twist—so what?

Yes, this post contains spoilers about Orange Is the New Black season 4.

It was the winter of 1997—shortly before Christmas—and I sat down shivering in the back of the school bus. A group of older students, all of whom had parents permissive enough to take them to R-rated movies while mine insisted on a PG-only policy, were discussing the plot of Scream 2, the Wes Craven-directed sequel to the previous year’s sleeper horror hit. I warned them that I hadn’t seen the movie yet—and likely wouldn’t see it for months.

One of my classmates (we’ll call him Biff, because all a-holes are named Biff) asked if I wanted to know how it ended anyway. That was the opposite of my point, I protested. “It was Billy’s mom,” Biff said, clearly intending to tell me no matter how hard I fought him. The forcible cruelty of the act is what bothered me, that it was more enjoyable for a 10-year-old to ruin my fun than to allow me to experience the movie with fresh eyes.

The film itself might seem dated now, but that experience is universal—whether it’s The Sixth Sense or The Empire Strikes Back. The critic Matt Zoller Seitz recalls punching the kid who told him that Luke and Leia are actually siblings.Those moments, of having what we love taken away from us, sting—and they stick with us.

But does having your entertainment “spoiled” for you really ruin your enjoyment of it, as George Lucas himself has argued?

As anyone who is prone to reading the last page of a book first will tell you, there’s a sincere enjoyment to surrendering our surprise. Knowing what comes last, like in Christopher Nolan’s Memento, can be an interesting exercise in seeing how the author, the showrunner, or the writer/director reached that logical conclusion. Movies like The Way We Were and Kill Bill, as well as Arthur Miller’s play Death of a Salesman, are actually about the ending—whether it’s looking back on the remains of a failed relationship, the exacting of a years-long quest for revenge, or the downfall of the American Dream.

At its worst, spoiler culture not only prioritizes the conclusion above all else but fetishizes shock—that holy-shit, WTF, I-didn’t see that-coming moment—above all other forms of entertainment. When so much of pop culture is already driven by hollow surprise as a way to chase ratings and Twitter mentions, our obsession with spoilers is detrimental to what it really means to both a consumer of culture and to meaningfully engage with it.

The debate over spoilers raged anew this week when Vox and Vulture accidentally spoiled the death of a beloved character on Orange Is the New Black. In the case of Vox, the goof was unintentional—the character’s name is in the URL; Vulture showed the character’s photo in its postmortem story, the kind where dearly departed TV actors give exit interviews following their on-screen death.

Indeed, the death of series regular Poussey in allegorical fashion to Black Lives Matter and specifically Eric Garner emerged as a Monday-morning conversation starter across the internet. It was a tweet-driven dialogue that made no room for stragglers. Google search for just the name “Poussey” right now and the first headline that surfaces on the newswire contains the phrase “Poussey dies.” What caused the frustration is that most viewers of OITNB haven’t plowed through the whole season yet, meaning that they weren’t able to experience the moment, in its heartbreak and tragedy, for themselves.

It was reminiscent of what befell West Coast viewers of The Jinx, who received a text alert from the New York Times about the episode before the HBO documentary series aired in their time zone.

A few years before #PousseyGate, Vulture itself attempted to answer the age-old question: When is it OK to tell someone that soylent green is made of people or that Cher ends up with her stepbrother? The entertainment website suggested that after three days, all bets are off when it comes to TV. In the case of movies, however, you have to wait a month before you can nix that ubiquitous “spoiler alert!” disclaimer.

But there’s a reason the Internet will never have its answer to Emily Post: It’s impossible to come to a unified definition of spoiler etiquette when How We Watch Now is incredibly fragmented. Two decades ago, when Internet commenters first began to grouse about spoilers in the halcyon days of Mulder and Scully, we could still speak of a “monoculture,” when it was expected that a mass horde of Americans were all tuning into see if our favorite sultry paranormal investigators locked lips. When M*A*S*H* went off the air in 1983, an estimated 105.9 million viewers tuned in. When CSI (among the most watched shows of the decade) dusted off its magnifying glass for the last time in 2015, just 12 million said goodbye to Grissom.

Today there are a record number of shows, and a record number of ways to watch them. In 2015, there were 409 scripted programs airing on traditional television, meaning that the estimate doesn’t include platforms like Hulu, Netflix, Amazon, Yahoo Screen, or the growing number of players in the streaming war.

As Vox’s Todd VanDerWerff pointed out, that has caused shows to get creative—and bloody—in the name of ratings, killing off an unprecedented number of characters. From Will Gardner on The Good Wife (whose shocking death even got a shoutout in the Andy Samberg mockumentary Popstar) to the foretold passing of Norman Bates’s mother on Bates Motel and the spate of lesbian deaths on TV, everyone is meeting their maker these days. Game of Thrones seems to kill off a major character every episode.

It’s not just about death, however. Shows like Scandal and How to Get Away With Murder are designed so that nearly every moment could be considered a spoiler. Shonda Rhimes, queen of the “hyperdrama,” has built her massive empire on fast-paced, breakneck shows that ruthlessly stack twist upon twist in order to ensure that viewers are watching in real time, lest they have the plethora of surprises ruined for them. On Twitter, it’s become a tradition for fans of her ABC lineup to tweet their reactions to the latest “oh no they didn’t” jaw-dropper as their favorite Shondaland program is still airing.

A great deal of pop culture has followed the template pioneered by Rhimes and Game of Thrones’s David Benioff and D.B. Weiss, who VanDerWerff credits as kicking off execution fever by killing Ned Stark. When a character with bipolar disorder committed suicide during the first season of Lifetime’s UnReal, it wasn’t an honest look at mental illness; it was exploited as a way to ramp up the drama, the low point of the great, underappreciated show’s freshman season.

But when every potential plot point is treated like an inviolable sacred object, nothing is sacred.

Treating the synopsis as the only thing that matters is a ludicrous thing to do when, in truth, very little of what actually happens is central to why we enjoy something. Pulling off a great television show or a definitive cinematic masterpiece is a team effort—an orchestra of mood that relies on a concert of sound, images, and montage to achieve the desired effect. To use an example first posited by the Chicago Reader’s Jonathan Rosenbaum: It’d be ludicrous to think that discussing the bravura opening of Alfonso Cuarón’s Gravity—which unfolds in an unbroken 13-minute tracking shot—is less of a spoiler than the fact that Dr. Ryan Stone (Sandra Bullock) happens to live at the end.

To quote Fred Armisen’s Joy Behar: “Who cares? So what?”

I knew before going into Gravity that Bullock’s character manages to survive the death of her crew, destruction of her ship, and harsh void of space. Contrary to popular belief, that made the experience more thrilling: Facing these insurmountable odds, how could she possibly survive? If Hitchcock once claimed that filmmakers build suspense by letting moviegoers know where a bomb is placed ahead of time, knowing what’s coming can be the ultimate means of building anticipation. Just ask viewers of Ryan Murphy’s American Crime Story. There’s hardly a person alive that isn’t aware O.J. Simpson got off, but the suspense is in the details.

Authors like Charles Dickens, who was famous for inserting plot points in his titles, and Henry Fielding argued that there’s a virtue in giving in to spoilers. In addition to saving us from a twist so ludicrous it ruins everything that came before it (e.g., Gossip Girl), knowing what happens allows to focus on what matters most—how the story is told.

Biff is still a jagoff, but 20 years later, that jerk might have just done me a favor.