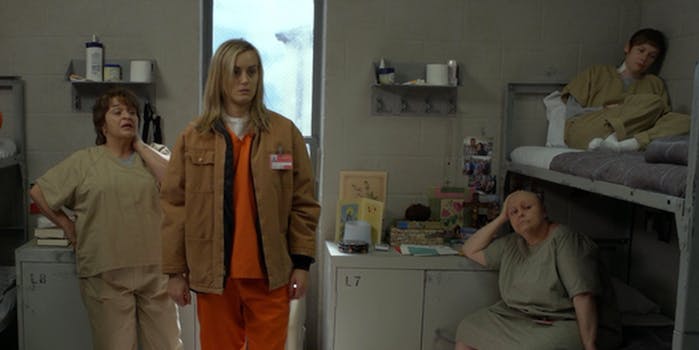 ‘Orange Is the New Black’ season 2: The up-all-night binge-watch review

Should the binge-watch, by nature of the word, be a more personal venture?

Warning: Spoilers ahead for Orange Is the New Black. And House of Cards.

Yesterday, I decided that instead of waiting until the weekend to binge-watch season 2 of Orange Is the New Black, I would start at midnight PST (well, 2am my time) along with thousands of other fans, and put my body and mind to the test. The show’s Twitter account spoke directly to me:

Why yes, I did take a power nap, and my strategy was to binge-watch OITNB until sleep took me.

Who else is planning on not sleeping because of Orange Is The New Black??

This seems futile, but in the era of middle-of-the-night Beyoncé releases, these things can’t wait another day. Netflix’s last original series debut came around Valentine’s Day, with House of Cards season 2. I watched it all in a weekend, like many did.

But was I really watching it? Do we lose a show’s finer points in the binge watch, as opposed to scheduled, extended viewings? I nodded off in the middle of the season, but was roused awake during the surprise threeway between Frank, Claire, and a secret service agent. Last May’s Arrested Development binge had no particular order, and the narrative was tweaked to switch point of view each episode. Would this have had more impact on a week-to-week schedule?

Orange Is the New Black is a compelling show, one in which women with personalities and backstories populate the screen. It’s the perfect mixture of comedic and dramatic narrative; it elicits empathy, as many popular shows with Internet fandoms do. That empathy is sharpened in season 2. The show changed how we talk about television, both in terms of the next-day watercooler conversations and the role of women in driving a show’s narratives.

Season 2 continues with the backstories: We get more on Taystee and her mother figure, Vee, who’s now at Litchfield as well. Piper’s back after her fight with Pennsyltucky, and an inevitable betrayal by Alex, who half-heartedly claims she wants to be her “prison wife.” The friendships and dynamics between women in the show continue to be refined. In one scene, Red tells Piper she has to be selfish in prison. I started to wonder what I’d be like in women’s prison. Would I just stand there and watch as my new prison friend Lori Petty gets beat up?

Is binge-watching selfish? Should the binge, by nature of the word, be a solo, more personal venture? Were there OITNB binge-watching parties I wasn’t invited to? Right now, somewhere, there are women watching the show together, clinking wine glasses and laughing, chunky bracelets colliding in slow motion. (Maybe I’m projecting here, but it’s late, I’ve been drinking rosé, and I’m a bit delirious.)

That “maybe just one more” feeling is exactly why binge-watching can feel so comfortable. There’s a security. We say “just one more” in a lot of daily situations, some of them not-so-healthy, and Netflix has programmed those original shows to be ingested quickly. There’s actually some science behind our addiction.

“TV viewers are no longer zoning out as a way to forget about their day, they are tuning in, on their own schedule, to a different world. Getting immersed in multiple episodes or even multiple seasons of a show over a few weeks is a new kind of escapism that is especially welcomed today.”

We need a constant narrative, and social media has provided us with one, but we have to contribute. Watching Netflix is part of that, but so is fear of missing out. McCracken noted the “in case of emergency, break glass” trend in binge-watching: saving shows for a later date.

The study also found that 80 percent of “TV streamers say they would rather stream a good TV show than read a friend’s social media posts.”

Well, that might be true. But last night, leading up to the premiere, Twitter was our lifeline. It’s replaced traditional previews before movies. It’s a way to keep fans engaged in this new era of social media screenings.

Orange Is The New Black just went live and Netflix has crashed due to thousands of excited fans trying to watch it all at once.

As the sun started to come up, I finally had to tap out of the binge-watch. I was starting to feel a bit disassociated, and had spilled my rosé after nodding off with it in my hand, ready for just one more. But I also experienced the collective excitement of the binge-watch. Even my dreams were of Orange Is the New Black.