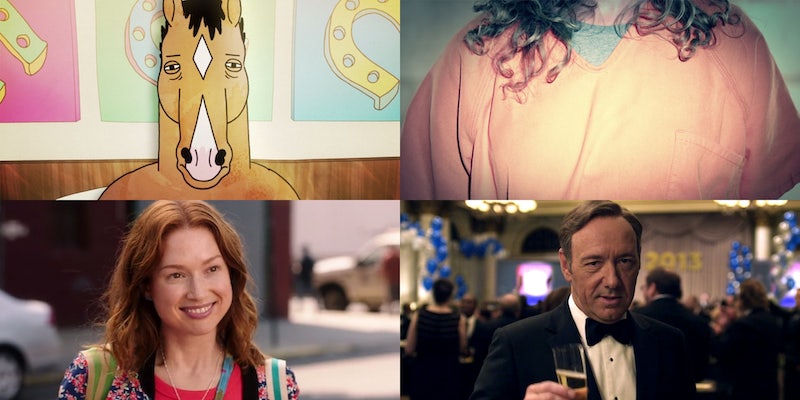 We can’t get enough of these 12 returning Netflix series

Netflix hasn't forgotten the shows that made it a household name for original content.

After having one of its biggest years ever, Netflix is ramping up to top itself in 2016 with dozens of new shows and feature films on deck. But it hasn’t neglected to renew fan favorites that have made Netflix Originals the successful household name we know and love. Here’s a look at the series returning to the smallest screen in 2016.

When last we left President Frank Underwood (Kevin Spacey), it looked like his seemingly invincible marriage had finally come apart at the seams, with his formidable wife Claire (Robin Wright) announcing that she was leaving him… and leaving us speechless. The fallout from that decision will undoubtedly cast a long shadow over season 4. Will Frank and Claire get back together? Should they? Regardless, Frank may finally have encountered the one opponent he can’t outthink, sneak around, or intimidate. It should be a match for the ages, or at least some seriously explosive makeup sex whenever (if ever) they reconcile.

Daredevil was a massive hit for both Marvel and Netflix last year, showing fans a darker side of Marvel’s Cinematic Universe and finally giving old hornhead the live-action adaptation he deserved. In 2016, Matt Murdock will have plenty more on his plate, including the return of an old girlfriend who also happens to be a goddamn ninja assassin (Élodie Yung as Elektra) and the appearance of another vigilante in Hell’s Kitchen—this one calling himself The Punisher (The Walking Dead’s Jon Bernthal). Netflix’s Daredevil finally gave the devil his due, so dare we hope this will be the kickass version of the Punisher fans have been waiting decades for?

Creators Tina Fey and Robert Carlock knocked it out of the part with this sitcom about a delightfully innocent former bunker-living cultist adjusting to life in the big city, and thankfully a second season is due out sometime this spring. Details are sparse at this point, but we know that Ellie Kemper will continue to be a delight, we’re keeping our fingers crossed for more Jon Hamm, and shots of Kimmy dressed like an elf suggest we might just get a holiday-themed episode of some sort. Or maybe she’s just dressed like an elf for no reason. Who cares? It’ll be adorable. Guest stars are rumored to include Girls’ Zosia Mamet, Pitch Perfect’s Anna Camp, and Tina Fey herself.

Netflix’s ambitious Marco Polo earned comparisons to HBO’s Game of Thrones… but unfortunately most of those comparisons were negative, and included some form of the word “wannabe.” Still, even though the critics weren’t always kind, Marco Polo was at the very least gorgeously staged, and it can always rally and improve in season 2. Just recently Netflix posted the one-off prequel “Christmas special” Marco Polo: One Hundred Eyes, which tells the origin story of the show’s warrior monk. As for the next full season, it will be hitting Netflix this summer with 10 more episodes of Marco’s adventures in the court of Kublai Khan.

Netflix’s prison dramedy has been a staple of the summer season for three years now, so while there’s no official release date, we should expect more OITNB in June or July. Being set in a prison, new arrivals are inevitable, and Under the Dome’s Jolene Purdy has been confirmed for a recurring role in the new season. Rumored storylines for season 4 include an overcrowding problem, a vengeful Alex, and a possible romantic entanglement for Crazy Eyes.

Filmed in Colombia, Narcos tells the real-life story of drug kingpin Pablo Escobar, and the various U.S. government agents dedicated to toppling his empire and stopping the flow of cocaine into the United States in the ’70s and ’80s. Like many Netflix shows, Narcos was renewed shortly after its initial premiere, but the series has recently hit some turbulence with the departure of showrunner Adam Fierro. Season 2 was originally slated to bow on Aug. 2, 2016, but the behind-the-scenes drama could very well delay the show, possibly even into 2017. This is the second time Narcos has lost a boss, after co-creator Chris Brancato left for a deal with ABC Studios last April. In the meantime, executive producers Jose Padilha and Eric Newman are running the show. Fingers crossed that the changes don’t hurt the show in the long run.

The potboiler family drama from the creators of Damages flew somewhat under the radar last year, in spite of plenty of critical praise and a stellar cast that includes Kyle Chandler, Ben Mendelsohn, Linda Cardellini, Sam Shepard, and Sissy Spacek. Thankfully, the show nabbed an early renewal less than two weeks after it premiered on Netflix last March. Filming was under way last month, with season 2 targeting a mid-year release. If you haven’t given the show a chance, it’s thoroughly bingeworthy, even if it’s sometimes a slow burn. John Leguizamo is slated to join the cast in season 2, playing “a man from Danny’s past.”

Netflix partnered with the Canadian network CityTV for this high-concept teen thriller series about a town that’s quarantined after everyone over the age of 21 begins dropping dead. When it premiered last summer, it was noteworthy mainly for breaking with Netflix’s normal “all episodes at once” model and instead rolling out one episode a week, after each one premiered on the Canadian home network. The show was largely overshadowed by Netflix’s returning favorite Orange Is the New Black and the ambitious Sense8, but fans will be happy to know that it’s coming back for season 2 this summer.

The news that Netflix was giving the world a third season of the acclaimed British anthology series Black Mirror was one of the best announcements of 2015 as far as we’re concerned, and new episodes can’t get here soon enough. But we may have to wait a while, because as of now there’s no confirmed release date or even release window. However, the show was one of the most buzzworthy topics of 2015 pop culture, thanks largely to its appearance on Netflix Instant, so a 2016 release would not surprise us at all. It’s already been over a year since the last original episode of Black Mirror—the Christmas special “White Christmas”—first aired. We do know that, whenever it comes, the third season will run 12 episodes, up from the first two seasons’ three each. Thankfully the full series and the Christmas special are currently available on Netflix Instant, so binge away if you haven’t already sampled this show’s brilliance.

Bojack Horseman handily wins the title of “weirdest Netflix original series,” with Will Arnett voicing a washed-up former sitcom star who also happens to be a, well, horse-man in a world populated by both humans and anthropomorphic animals. Netflix ordered a third season of the animated series last July, shortly after the second season premiered. Like Orange Is the New Black, it’s been a Netflix summer stable staple for several years now, so it would be hugely surprising if season 3 didn’t come out the gate around the usual time this year. But at least we know it hasn’t been put out to pasture.

Another of Netflix’s smaller, more under-the-radar premieres from last year, Grace & Frankie stars Jane Fonda and Lily Tomlin as two women who can’t stand each other brought together by an unlikely bonding moment: their respective husbands (Sam Waterston and Martin Sheen) falling in love and running off with each other. The show was created by Marta Kauffman (Friends) and Howard J. Morris, and has included an impressive lineup of guest stars, including Corbin Bernsen, Craig T. Nelson, Ernie Hudson, and Michael Gross. Details about season 2 are few and far between, but Netflix has already renewed the show for a third season. Season 1 premiered in May last year, so a late spring/early summer return would make sense.

One of several Netflix “rescues,” Longmire was given a fourth season by the streaming network after its original home of A&E decided three seasons was plenty for their liking. Thankfully fans and crusty sheriff Walt Longmire got the chance to pick up the story last September on Netflix, and word is that season 5 will ride on down the trail around that same time this year. That’s especially good news, since season 4 ended on a cliffhanger, with a mysterious intruder busting into Walt’s home and ruining his sexytime with Dr. Donna. More good news for Longmire fans: Each of season 5’s 10 episodes will run a full hour, abandoning the network-holdover 42 minutes from season 4. You’re not just getting more Longmire; you’re getting more more Longmire.

Netflix embraced high-concept head-tripping weirdness with last summer’s Sense8, a collaboration between the Wachowskis and Babylon 5 creator J. Michael Straczynski. And, like everything from the Wachowskis, the results were both ambitious and divisive, unfolding a sprawling story that stretched across the globe and large cast in a tale of eight strangers who suddenly become psychically connected. In spite of not being a runaway hit, the show was renewed for a second season, and many fans were hoping it would arrive in the same early summer slot this year as it did last. However, a recent interview with cinematographer John Toll suggests we’re going to have to wait a bit longer for more Sense8, as shooting on the new season won’t even begin until March. That gives you plenty of time to give the show a chance if you haven’t already.