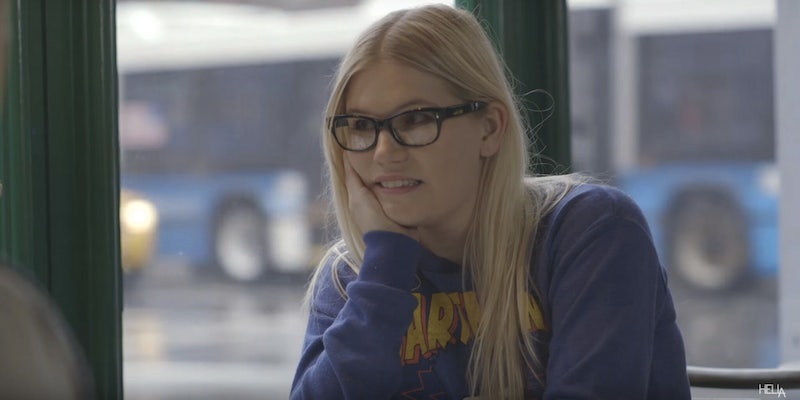 Enter the hellscape of Southern California with ‘Only in HelLA’

Preventative botox before 25? Only in 'HelLA.'

Before she could legally rent a car, Los Angeles native and comedian Rory Uphold was told by a dermatologist to consider preventative botox. She credits this as her starting inspiration for Only in HelLA. Now back for a second season, Uphold’s 2.7-million viewed webseries returns with a cast of Hollywood heavyweights and even more “only in L.A.” moments.

“Every episode is a joke about a ‘HelLA’-type moment,” Uphold told the Daily Dot. “But the larger theme is feeling like a sane person in a crazy world or like an outsider in your own home. The absurdity of L.A. is something that I love—and love to make fun of.”

Debuting a new sketch every Tuesday, HelLA captures the perpetual parking tickets, the traffic, the spray tans and L.A. natives’ ability to substitute every ingredient in their meal. But it’s presented through a len that lovingly mocks this Southern California lifestyle in only a way a true L.A. native can.

The success of the series is twofold. In part, it is a triumphant blend of traditional Hollywood actors and some of YouTube’s most influential talents including Veronica Mars’ Chris Lowell, Sophia Bush, Glee’s Kevin McHale, Akilah Hughes, and BuzzFeed’s Ashley Perez.

“One of the best parts about this project is that I’ve been able to work with so many incredibly funny and talented people who have been really open and willing to play. Almost all of the actors were friends of mine from before, and those that weren’t are people I reached out to because I really wanted them for a specific episode and/or I was just a fan and wanted to collaborate.”

But it’s Uphold’s filmmaking voice that makes viewers want to continue coming back and supporting the series. Honest, dry, authentic: Uphold’s characters hits the right notes as not a perfect female lead but a woman just trying (and often, like the rest of us, failing) to figure out her best life. The series has been nominated for countless film festival awards including Official Selection of New Filmmakers Los Angeles, Official Selection for Nashville Film Festival, and LA Webfest Nominee for Outstanding Comedy Series.

Much like Hot Mess Moves, I Ship It, and Afflicted, Inc., Only in HelLA is inspiring a generation of young female filmmakers to view YouTube as a playground in which their to make their mark.

“Digital media is seeing a wealth of unique and different stories that aren’t being explored in traditional media, and that is exciting,” Uphold said. “The best advice I can give to anyone wanting to create their own work is just start. Keep it honest, keep it short, and always follow your gut.”

Screengrab via Only in HelLA/YouTube