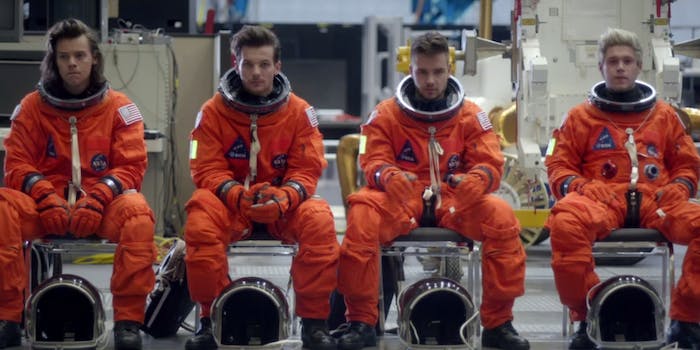 Houston, I think we have 1D.

One Direction launched the next part of their career by getting none other than NASA itself for their first post-Zayn Malik music video.

Shooting at the Johnson Space Center in Houston, Harry Styles, Louis Tomlinson, Liam Payne, and Niall Horan, each got to experience the different kinds of rigorous training exercises that the astronauts use to prepare for travel to the ISS, Mars, and beyond.

Throughout the video, Styles encounters Robonaut, a “human-like robot,” Horan tests out the Partial Gravity Simulator, Tomlinson drives a Space Exploration Vehicle rover, and Payne trains inside of an ISS replica.

The only thing bringing 1D down? The gravity, of course.

According to NASA, the group then filmed inside of a replica the Orion Spacecraft, a ship currently in-development in order to handle deep space exploration. And with millions of eyes on NASA, the organization is providing more information about its Journey to Mars mission and educating what might be the next generation of astronauts and scientists with the power of 1D. And there’s absolutely nothing wrong with that.

We are planning a #JourneyToMars and nobody can drag us down! Details: https://t.co/PMWisrEMMZ #DragMeDownMusicVideo pic.twitter.com/YQWUwEIwfE