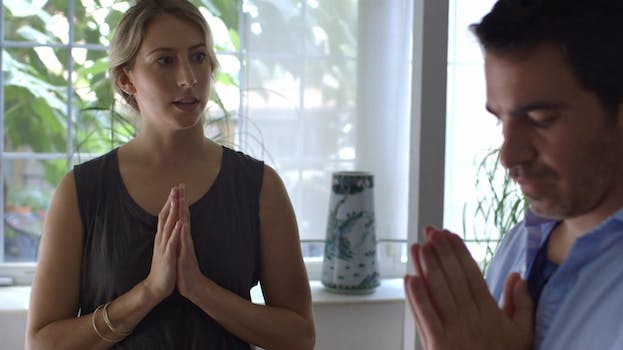 It's a smooth, comforting ride.

OM City is the kind of thing that is only ever a couple of missteps away from terminal tedium. It’s a webseries that tracks the personal growth of an uncertain NYC yoga instructor. Examining the clash between her everyday problems and the seemingly generic spiritual practices of her vocation—played over a backdrop of silences, yoga classes, and “purge” sessions—there is a clear risk that the series could tumble down the rabbit hole and emerge up its own ass.

But from the very first sequence of the series, which follows Grace (Jessie Barr), late for class, as she sprints several blocks, it is clear that we’re in good hands. The rapid camera pursuit is exhilarating and delivers a quick hit of doubt to those who may have prejudged it. While a rare moment of action in the series, it remains hanging above it, a reminder that the languid nature at the show’s base is by choice rather than due to some limit in skill.

It’s such a smooth, comforting ride that we almost don’t notice that OM City has essentially no narrative. The writer and director Tom O’Brien—who previously helmed the feature Fairhaven starring The Mindy Project’s Chris Messina, who cameos here—could be faulted for this. Sure there is a peripheral story about Grace’s sick mother, her brother is writing a novel while supporting himself by drug dealing, and there is a small, damp spark with her boss (O’Brien, her real-life husband) but these are all secondary to her own meandering introspection.

This preoccupation with the ontological makes sense if you consider the series to be a companion piece, or an artistic representation of the yoga that it features and the act of meditation itself. I don’t think I’m overreaching to posit this; the series is certainly made with an intelligence that suggests that this could be its intention.

But as fascinating as that sounds from a theoretical perspective, the pragmatist within demands something slightly more dynamic. O’Brien writes such crisp, naturalistic dialogue that you wish he’d use it to develop some of the onscreen relationships, while Barr would be even more engaging were her life not made to seem so transitory.

These are criticisms of a lovely series that, to be sure, run counter to its intentions. And they may be things that a second season means to rectify, with Grace having progressed to a different stage in life, one with more certainty. But not everyone has the patience of the yogi, and if you mean for them to hang around, things sadly must be sped up.

Screengrab via OM City The Series/Vimeo