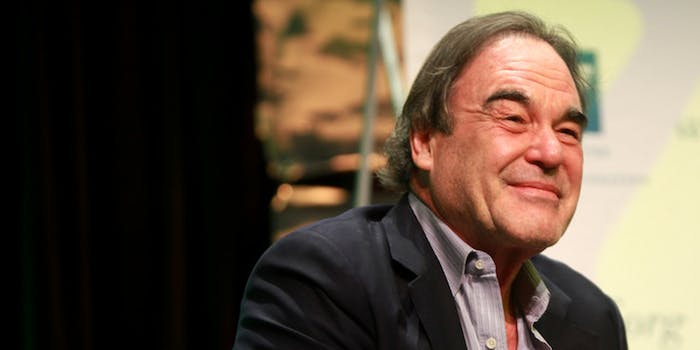 Our favorite predictions for Oliver Stone’s ‘The Snowden Files’

And the Oscar for most paranoid screenplay goes to...

The older Oliver Stone gets, the closer his political films follow on the heels of the true events that inspired them. Now he’s set to tackle a thrilling story of geopolitical intrigue and government secrecy that, by all indications, is far from over: Edward Snowden’s.

His source material on the National Security Agency whistleblower is Luke Harding’s The Snowden Files: The Inside Story of the World’s Most Wanted Man, an account praised for its “acute” insights and “often-cinematic” drama by critics in the New York Times and Washington Post.

News! Oliver Stone has purchased film rights to my book “The #Snowden Files: The Inside Story of the World’s Most Wanted Man”

Anyone familiar with Stone’s biopics, however, knows he like to take some artistic license with his facts—or at least wildly speculate about what Donald Rumsfeld might call the “known unknowns.” So what wacky choices can we expect from the hit-or-miss auteur?

Well, for starters, we’re sure he’s in Snowden’s corner, not Obama’s. Duh:

Next, as usual, is the question of casting:

So who will play #Snowden in the @TheOliverStone movie? I nominate Jake Gyllenhaal. cc @lukeharding1968

Jesse Eisenberg stands on apartment balcony at sunrise. “Who am I?” he stage whispers. #oliverstonesnowden

BREAKING: Oliver Stone to direct Edward Snowden movie, lead character to be played by every male barista you’ve ever hated

But can he make the complicated spy saga entertaining?

i can’t see any way this will be anything other a total triumph, just like wall street: money never sleeps http://t.co/K8s9QXnQr5

At the end of the day, most observers are more concerned about how Stone might twist the tale to his own ends—and misinform the public in the process.

So, it won’t be heavy handed, right? @politico: @TheOliverStone is set to direct an Edward Snowden thriller http://t.co/brVfY1VI7H

The world totally needed an Oliver Stone movie about Edward Snowden. Surely it will be a paragon of accuracy

.@TheWarRoom_Tom @guardian I can think of no better way to discredit Ed #Snowden than to have Oliver Stone make a film about him.

Stone’s film, moreover, may face competition from Sony Pictures, which just last month snapped up the rights to Glenn Greenwald’s book on the same subject, No Place to Hide: Edward Snowden, the NSA, and the U.S. Surveillance State. Michael G. Wilson and Barbara Broccoli, producers of the James Bond franchise, will helm that project.

One things for sure, though—both movies ought to be better than The Fifth Estate.