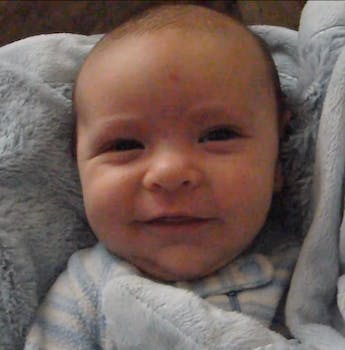 Oliver Bushon may not know it yet, but he's on Can-dad Camera.

Little Oliver Reese Bushon is a 3-month-old baby, so he poops and eats and sleeps and cries.

Oliver also does one other thing: When he wakes up, his face contorts to show every human emotion known to man.

“It all depends on whatever he’s dreaming about, I guess,” Brian Bushon, Oliver’s father, told the Daily Dot. “Sometimes he just wakes up straight screaming.”

Big Bushon should know. The father, a Sonoma County, Calif., resident, left his job upon Oliver’s birth and has spent the past three months raising his son with a camera firmly fixed on his every move. Since Aug. 10, Bushon has posted 31 home videos to the YouTube channel ForTheOrb, a YouTube channel Brian plans to maintain “until Oliver the Orb takes it over in a few years.”

“I have no videos of myself as a kid,” Bushon explained. I can never look back and see how I was. I have a few pictures, but no videos, and I didn’t want the same to be the case for Oliver.”

Bushon said that he shoots footage of his son every single day, whether it’s something so developmental as immunizations or if Oliver simply bumped his head and smiled. He said that he shoots the videos mostly so that he can create memories and give distant relatives a way to follow Oliver’s growth, but he’d entertain television or reality show offers should Hollywood come calling.

“If it’s successful, that would be awesome,” Bushon said. “I’m already looking at filming it such that it turns out not quite like The Truman Show, but possible close.”

Oliver himself had no comment on the issue, but he did flash a big toothless grin—the type of smile you’ll surely see at some point in his wakeup.