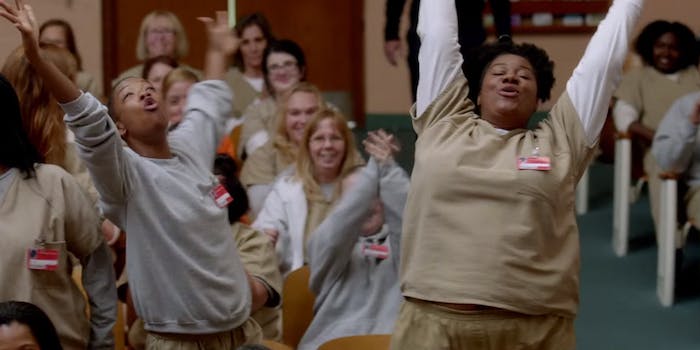 No, ‘Orange Is the New Black’ isn’t being cancelled by Netflix

A fake news story sent 'Orange Is the New Black' fans into a panic.

The streaming service reassured fans that it wasn’t cancelling Orange Is the New Black after a satire website’s article sparked outrage from fans on Twitter.

Empire News, a satire site similar to The Onion, published an article claiming that Netflix cancelled the show due to a feud between Netflix cofounder and CEO Reed Hastings and OItNB creator Jenji Kohan. According to the story, Netflix was not only cancelling the popular show, but planned to remove it from instant streaming starting on Sept. 1.

The article claimed that Hastings wanted more male leads in the show about a woman’s prison, which Kohan refused to do.

“A woman’s place is in the home, in the kitchen, taking care of children,” the article quotes Hastings as saying. “A woman in jail? How does anyone even watch this show in the first place? It’s like we took everything bad about OZ, and make this show with the leftovers.”

Netflix picked up OItNB for a third season a month before the episodes even debuted, but the satire article was enough to send fans into a panic over the weekend. Fresh off a historic 12 Emmy nominations for the show, Netflix told fans that the rumors simply weren’t true and that OItNB is currently in production for its third season.

Orange Is The New Black has NOT been canceled. Whoever started this rumor will be spending some time in the SHU. pic.twitter.com/tslCdjBkht

OItNB star Michael Harney even had some choice words for the site.

Season 3 is on-track to come out sometime next year.

H/T The Wrap | Photo via Netflix/YouTube