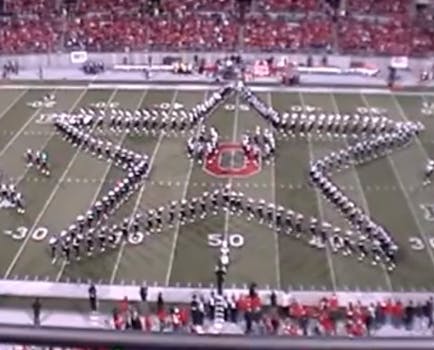 The Ohio State University marching band, long heralded as one of the most choreographed, dynamic, and inventive marching bands in bigtime college football, drew rave reviews this weekend for its orchestration of a full-blown, brass-hued ode to some of the greatest video games in existence. For nine minutes, the buckeye band harped on and arranged themselves in tribute to such iconic games as Zelda, Halo, Pokémon, and Tetris.

A video of the performance, uploaded to YouTube Sunday by OSU enthusiast handmrow gobucks, has already racked up nearly one million views.

“Amazing,” wrote YouTuber MrValzen after watching the video. “Never seen anything like it. Makes the 2008 Olympic opening ceremony look like nothing.”

The video’s actually gotten so popular that one member of the band agreed to host a Reddit AMA (“Ask Me Anything”) Monday.

“Although this last halftime in the Nebraska game was among the best shows we’ve ever done, we’re definitely not just a one trick pony,” the band member, who goes by Gatmann on Reddit  wrote in advance.

“This video is a tribute to the Beach Boys. Some of you probably saw the surfer .gif when it was getting upvoted a few weeks ago. Then there’s this one of a Hollywood show, including an awesome part with the Titanic and the Pirates of the Caribbean, though the music is hard to hear. In any case, it’s definitely worth looking up some of our other shows: while some may have stood out, they’ve all been excellent.”

Naturally, the first question made reference to “that other marching band in Ohio,” the Ohio University band, dubbed with just a hint of competitive irony as The Most Exciting Band in the Land. They’re the ones who put OSU’s marching band on watch earlier this season with a high octane rendition of PSY’s “Gangnam Style.”

“How big of a rivalry do you guys have with them? Or do you even compete with them?” redditor BraKes22 asked.

If the Band is anything like its football team, you can bet they keep their friends close and their enemies even closer.