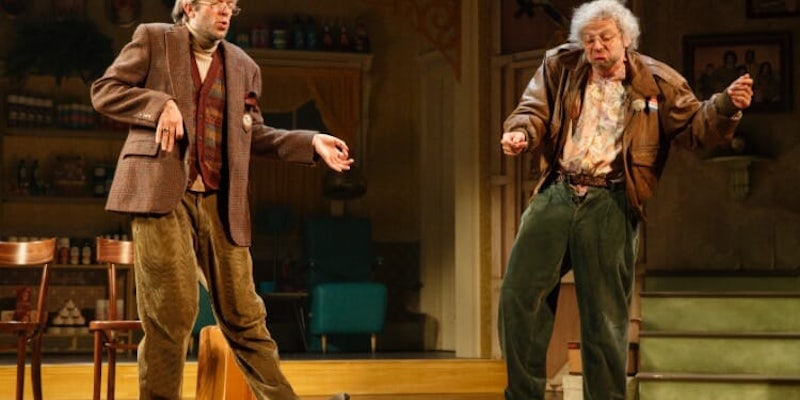 ‘Oh, Hello’ packs the tuna and the laughs

Reviews don’t get much easier than this. If you think Nick Kroll and John Mulaney are funny, you’ll like their special Oh, Hello. If you think their characters Gil Faizon and George St. Geegland are hilarious, I have good news: After conquering the podcast, television, and stage formats, Faizon and Geegland have conquered Netflix.

If you’re already a fan, I assume you’ve stopped reading to go watch the special, so here’s a brief setup for newcomers. Gil and George are turtleneck-rocking bachelors from the Upper West Side. You can check their Wikipedia pages for more details, but the main thing to know is they’re hilarious. Kroll and Mulaney created the characters over a decade ago and have unleashed Gil and George everywhere. If you want a primer, or just more Gil and George after you watch the special, their podcast appearances on Comedy Bang! Bang! or Call Chelsea Peretti are readily available, as are their bits on Kroll Show. Or you can cut out the middle man and search for YouTube clips.

Mulaney, best known for his standup and work on Saturday Night Live (he wrote Stefon bits with and for Bill Hader and even does a Stefon-esque “this place has everything” line), is the nominal lead in Oh, Hello. As George, he introduces most of the premises and stops sporadically to scold the unfortunate stagehand. Kroll (The League and Kroll Show), is marginally more unruly as Gil, who walks the stage like a septuagenarian praying mantis.

The show starts with Gil and George introducing themselves on a catwalk-wide stage (“Charmed I’m sure, Gil Faizon” is always good for a laugh). After making acquaintances with the audience, the curtain raises and reveals their set. The guys launch into the show proper with a riff on Billy Crystal’s 500 Sundays titled 700 Sundays. Gil and George recount their histories with plenty of detours along the way. It’s an amusing joke that also provides the show with its arc.

Mulaney and Kroll are incredible improvisers, and they leave themselves plenty of room within the show’s structure for spontaneity. These moments are where Oh, Hello really makes its mark. Mulaney and Kroll just keep trying to one up the other while also trying to make the other break. The off-scripts parts of the shows highlight their chemistry. They’re so in tune with each other that even their mistakes look intentional. One of the many standout moments features Gil abruptly holding and rubbing George’s pinky. The joke heightens when Kroll gets Mulaney to stop his lines and shake off Kroll’s hand to tell him, “not in life or in the play.”

There’s an extended “Too Much Tuna” bit (how could there not be?) with guest Steve Martin. It’s the highlight of a show full of bright spots. Gil and George question Martin, asking him about any movie memorabilia he kept. To which Martin mentions his Three Amigos costume. The follow-up question (“Do you still wear it?”) yields one of the few pointed political jokes. Martin says “no” and Gil replies, “you could be deported.” Once Martin exits the stage we jump right back into the saga.

By the time the show comes to a close you’ll have had the full Oh, Hello experience. Credit director Alex Timbers for some interesting camera placements that put us onstage with Gil and George at choice moments. There’s an argument to be made that these characters, as well as Kroll and Mulaney, are funnier the looser the setting. The performers are talented enough working off the cuff and on the page that Oh, Hello hits significantly more than it misses.

People may have been priced out of seeing Oh, Hello during its Broadway run, or not been anywhere near New York, but Netflix is the great equalizer.  Now everyone can have a seat at the table with Gil and George. Charmed, I’m sure.