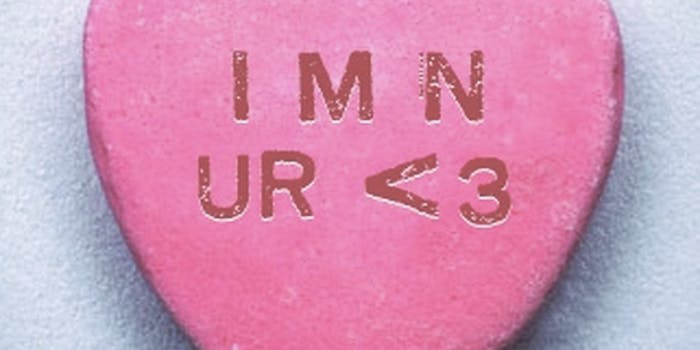 For some would-be Valentines, sending a dozen red roses to your office crush’s desk from “a secret admirer” may be too much effort or too telling. Why go to all that trouble when you can let them know of your secret interest in them through a tweet?

A Valentine’s Day-themed website called Office Cupid takes the pain out of professing your love for someone by letting you send them an anonymous tweet. The site was created by New York-based digital agency R/GA, which has devoted its Twitter account over to romantics for the day.

The process is straightforward: Just type in your crush’s Twitter handle and provide a few details about them. If you’re feeling particularly bold, you can add your own Twitter handle to the tweet.

R/GA will then work its magic to write a tweet and send it to that cute guy or gal you’ve been secretly pining for.

Here are a few of the Daily Dot’s favorite tweets so far:

“@krbyrne Despite your futile, possibly mad, love of the Islanders, someone thinks you’re highly crushworthy.”

“@sleemo Your orange beard, cartoon-drawing ability, and healthy appetite have endeared you to another.”

“@mab397 Your “red nose and ridiculous glasses” do something to an admirer I can’t repeat here!”

“@nickcicero Congratulations (I think) — your “hot trumpet lips” have someone smitten.”

“@pacebook Your office crush loves how you athletically devour your sandwiches.”

It’s a cute idea and is certainly a little different from sending a boring drugstore card to your prospective lover’s desk.