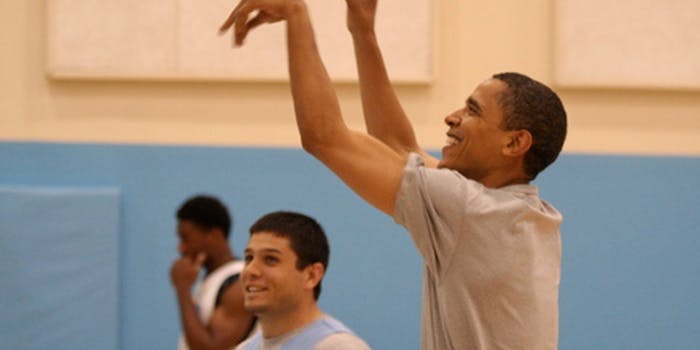 The famed statistician and the president have surprisingly similar picks for the 2013 NCAA men's basketball national tournament.

Statistician wizard Nate Silver is crunching the numbers for this year’s 2013 NCAA men’s basketball national tournament. The man who correctly predicted the winner of every single state during the 2012 presidential election is hoping to do the same by correctly picking the outcome of every single game.

Also partaking in the March Madness is President Barack Obama, who went on ESPN Wednesday to fill out his bracket for the fifth time in as many years. Obama’s staff also posted the president’s predictions online.

So how similar are Obama’s predictions to the statistical oracle?

Obama and Silver picked the same team 29 times for the round of 32. Instead of picking the higher ranked team of each matchup, Obama picked Cincinnati over Creighton, Oklahoma over San Diego State, and— upset alert!— Tenn.-based Belmont University over Arizona. According to Silver’s odds, the president’s picks’ chances of winning are 41.5 percent, 43.9 percent, and 28.3 percent, respectively.

When asked by ESPN why he picked 11th-seed Belmont over 6th-seed Arizona, the Obama responded by saying that “they’re small but they shoot lights out.”

For the Sweet Sixteen, both men picked identically.

The two once again disagreed in their selections for the Elite Eight. Both agreed that Louisville, Duke, Ohio State, Florida, Indiana, and Michigan were moving on to the quarterfinal portion of the tournament, but they disagreed when it came to Wisconsin vs. Gonzaga and Michigan vs. Kansas. Citing a bias for the Big 10 (his home state of Illinois plays in the conference), POTUS gave the nod to the Wisconsin over Gonzaga— despite Silver only giving them an 19 percent chance of making the Elite Eight— and to Michigan over Kansas.

In terms of the Final Four, Obama and Silver picked three of the same four teams: Louisville, Florida, and Indiana. Ohio State rounds out the president’s bracket, whereas Silver picked Gonzaga to make it to the semifinals.

The national championship game looks exactly the same for both men. If they’re correct, the final will be Indiana versus Louisville. Obama has Indiana winning it all. Silver’s bracket gives the nod to Louisville, who he says has a 23.8 percent chance of winning it all.