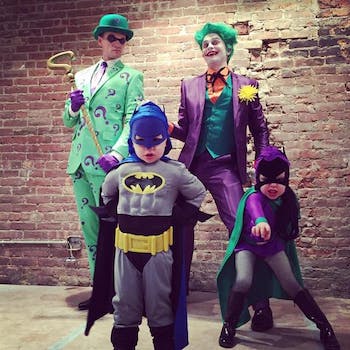 There’s always the usual fanfare on Halloween of costumes, tricks, and candy, and whether it’s clever jack-o-lanterns, scary stories, or ill-conceived tweets, there’s something for everyone. But the annual family photo from Neil Patrick Harris and his husband David Burtka with their twins Gideon and Harper has eclipsed them all.

It’s one thing to dress your kids up in adorable costumes, but this clan does one better. They all don matching costumes, and each year they’ve managed to top themselves. In the past they’ve transformed into iconic characters from Peter Pan, The Wizard of Oz, Alice in Wonderland, and an array of adorable monsters.

But it’s only a matter of time before this family puts on their costumes again this year. And Harris knows that we’re waiting.

He showcased Gideon and Harper on Twitter Thursday night to remind us that, if we weren’t already aware, Halloween was coming and we should know what was to come.

And earlier today, he posted another teaser, upping the anticipation further.

Papa, when are we putting on our costumes? We want to go trick-or-treating already!! #soon pic.twitter.com/UbWOdxjBcz

Finally, the big reveal: a fearsome foursome from Gotham City. Gideon and Harper are adorable as Batman and Batgirl, but Burtka and Harris shine as the Joker and the Riddler, respectively.