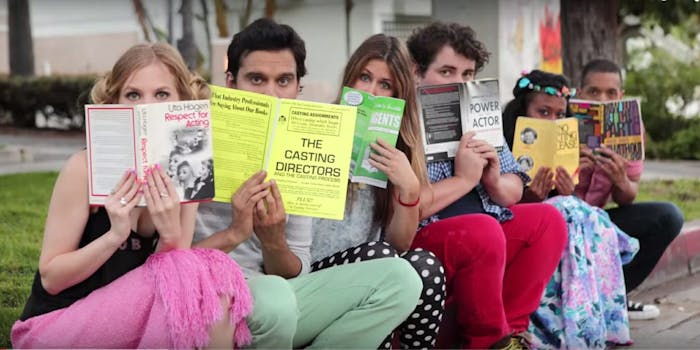 The exasperating reality of ‘Not So Union’

What does it mean if you're good at playing a struggling actor?

There is no group of failures more examined than the wannabe actor. It’s a tiring yet embedded quirk of the creative process: For every piece of misguided advice of the “write about what you know” variety, we seem to be rewarded with a film, TV show, or webseries featuring 30-somethings still trying to make it. It is unrelenting. This week there is Not So Union—starring a guy from that reboot, 90210 and a cast of acting nobodies playing, well, acting nobodies.

Why is this annoying exactly? Well, for starters, the mass of these things indicates an implicit importance placed upon their “craft” and a desire—nay, requirement—that they document their enlightening passage.

But whether or not you believe the old studio mantra that actors are meat puppets and nothing but, you must admit that there is a stark disparity. Where are the films about failed masseurs or struggling, wannabe croupiers? What about news anchormen, that other great vocation where you read what others write, sit where you are told, and then hang around for plaudits? What about their hopefuls?

And this is the reason that Not So Union exasperates. Not because it has the cadences of a comedy but is lacking in jokes. Or that it has an initially diverting enthusiasm that sadly orbits around a lazy, hackneyed soul. But because with all the time and energy spent on this thing, it so easily could have been about something that we haven’t seen so many times before.

The issue is even inadvertently raised in the second episode, “We’re Best Friends.” As a training exercise at the acting class that the show’s cast all take, they are encouraged to call out descriptions of characters that they think the others should play. The activity is used as an excuse to call Michael Steger a terrorist—and in the callback, a gay terrorist—as well as a Bollywood dancer and a “future ex-husband.”

But does anyone shout out that he should play a wannabe actor? Tellingly, no. And why? Because it isn’t going to be funny, as it is the sort of role that he’ll actually end up playing.

So even with this as a known, in the planning stages for Not So Union, it was decided that this was going to be the setup for their comedy series. It’s an inherently unfunny scenario. Sure, great humor can be derived from even the most interminable situations, but Not So Union doesn’t have Beckett as a script doctor, and in an eight-minute webseries episode, you need all the help you can get.

It’s a decision that immediately signifies the series as unoriginal and sends it straight back into the pack. And anyway, why exactly would you want to play something that you already are? Is that even acting? What if you’re bad at playing a struggling actor? Or even worse, are convincing at it? Maybe consider the gay terrorist route. At least then your series will stand out.

Screengrab via Not So Union/YouTube