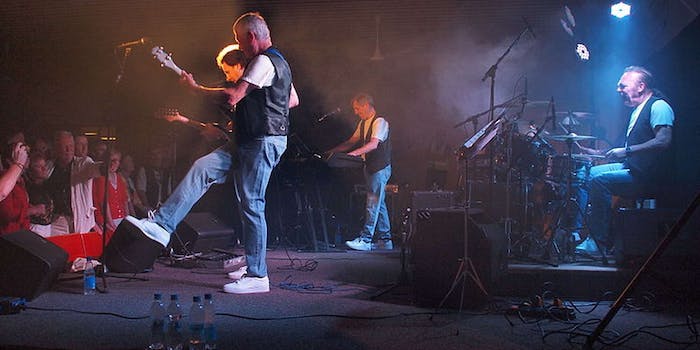 We made you that #Normcore playlist you didn’t ask for

All these amazing Huey Lewis songs aren't going to listen to themselves.

Have you heard about Normcore? It’s the hottest new fashion trend that’s sweeping the nation.

First articulated in a New York trend piece, Normcore (pronounced ‟#Normcore”) is basically what happens when Brooklyn hipsters decided it would be cool to dress exactly like their oh-so-square parents back in Indiana—ill-fitting dad jeans, faded baseball caps, white running shoes over black dress socks, etc.—but with nary a trace of the expected irony.

Daily Dot writer Audra Schroeder explained that it’s largely a reaction against the disposable consumerism inherent in most fashion trends. ‟We’re at a point in culture where dressing like you’re in a witness protection program has become cooler than buying an identity,” she noted.

Like any lifestyle trend, Normcore needs a soundtrack; music to be blasted by kids rocking Patagonia jackets and khaki cargo shorts. As something that maybe approaches a public service, we’ve put a playlist of Normcore jams for your pleasure.

What does Normcore sound like? Well, it’s certainly rockist, overwhelmingly white, and draws mainly from North American bands of the mid 1970s through late 1990s. The Counting Crows are on there, as is Billy Joel. Huey Lewis appears multiple times because, if there was ever a poet leaurate of Normcore, it’s the dude who wrote ‟Hip To Be Square.”

Still confused about normcore? (Yeah, that’s the correct reaction). These tweets might help:

A spectre is haunting fashion: the spectre of #normcore. https://t.co/FmDImurVG7

#normcore is the episode of “Doug” where everyone starts wearing green sweater vests and khaki shorts pic.twitter.com/STVvC6x4f5

Also, if you think that whole thing is kind of dumb (yeah, that’s the correct reaction) it’ll probably all be completely forgotten in about a week. But, while Normcore is still a thing, just continue dressing exactly how you’ve been dressing all along and you’ll fit right in.