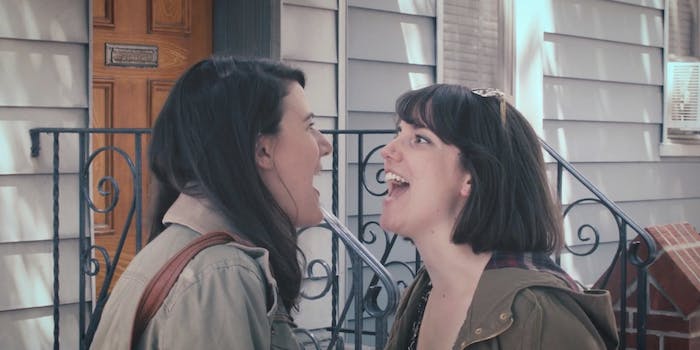 Embrace the rom-com of your life in ‘The Nora Ephronicles’

Would it be a walk in the park? Or would public masturbators be lurking around every corner?

What if young women in New York City lived their lives like they were waltzing through a Nora Ephron film?

Kelsey Bailey and Kelsey McLaughlin are a comedy team with a passion for rom-coms and a special place in their heart for Nora Ephron who dared to ask that very question.

Would it be all flirty emails and whimsical bobs? Or would cringe-worthy run-ins with public masturbators and muffin-induced orgasms rule the day?

In the world of The Nora Ephronicles, a smart new webseries from the two Upright Citizens Brigade performers, life is filled with all of the above and more.

Bailey and McLaughlin’s love affair began in an improv class at the Upright Citizens Brigade Training Center in New York. “It became very evident early on that we both are middle-aged women trapped in twenty-something bodies,” McLaughlin told the Daily Dot.

Much like the stars of any good rom-com, their love story wasn’t without obstacles. “I sort of avoided investing in [a friendship] at first,” explained McLaughlin. “I just didn’t feel like I was going to become really close friends with another person named Kelsey. But then I just became obsessed with her.”

Last spring, when the two were dissatisfied with their comedy careers, they found themselves bonding over their shared love for all things Nora Ephron. McLaughlin recalled, “We’d meet up and get manicures and watch Nora Ephron movies. And then one day it was like, ‘What if we were in a Nora Ephron movie? And isn’t it sad that we’re not in one?’”

Bailey added, “If we actually kept living our lives thinking everything was like a Nora Ephron movie, it would just crash and burn. And [when we wrote the webseries] we tried to figure out the craziest, most heightened way that could go.”

The resulting webseries is a darkly sunny walk in the park. Bailey and McLaughlin channel the optimism and cheer of Ephron’s protagonists and greet every failure with all the spunk of Meg Ryan. But their quips and observations bend absurd and grim. When they go back and forth explaining the events that have ruined their week, McLaughlin laments, “An air conditioner fell on me on the first day of my period!”

And like any good rom-com you’ll find yourself rooting for these two as they fumble from a rendezvous with Snapchat penpals to a disastrous date, to one very important haircut.

The series lovingly satirizes Ephron’s films as well as all the disappointments of wishing life were, well, a little bit more like a rom-com.

“We always laugh about how dichotomous our lives are compared to Nora Ephron films, so we throw a lot of the real awful stuff that happens in there,” McLaughlin laughed.

The series, which features an Ephron-esque soundtrack and soothing muted colors, is a fun escape from the grimness of daily city life—and simultaneously a smart nod at the pervs lurking around every corner.

Much like the writer they adore, Bailey and McLaughlin infuse their plotlines with wit and spunk.

Bailey explained her fondness for Ephron’s films: “Her movies are so much smarter than typical rom-coms. The dialogue isn’t cheesy… and the [intelligence] of the female leads is so much more respectable. Like I’d hang out with [You’ve Got Mail lead] Kathleen Kelly any day of the week.”

Screengrab via The Nora Ephronicles/Vimeo