If you enjoyed the movie but found Dr. Mann's storyline a bit weak, this comic may help.

Interstellar was pretty interesting as a piece of blockbuster science fiction, but like most Christopher Nolan movies, it was rather light on character development. The main two or three characters got some backstory, but most of the other roles were empty, propped up only by the caliber of the actors in question.

In a new Interstellar prequel comic in Wired magazine, Nolan himself attempts to rectify this issue. He explores one of the most intriguing side-characters in the movie, Dr. Mann. Prior to the events of the movie, Mann set out alone on one of NASA’s first missions to find a habitable planet on the other side of the wormhole. By the time we see him in Interstellar, he is a changed man.

The 7-page story, illustrated by comic book artist Sean Gordon Murphy, doesn’t just touch on the earlier years of the Lazarus mission. It also gives us a little more insight into the robots we see in the movie. These characters (if indeed they count as “characters”) are one of the few hints of futurism we see in the world of Interstellar, which was purposefully designed to resemble present-day America.

These boxy metallic machines are programmed to exhibit human personality traits, but they look about as inhuman as possible. The benefit of their design is the absence of the “uncanny valley” creepiness that a humanoid robot would exude. In Interstellar, the robots’ purpose is to help the astronauts perform tasks that would be impossible for human minds and bodies to accomplish. However, it is strongly implied that their veneer of personhood is merely pre-programmed to make their human masters more comfortable, as opposed to being the organic result of an artificial intelligence’s interactions with people. As Mann points out in the movie, the robots’ lack of survival instinct makes them little more than tools. 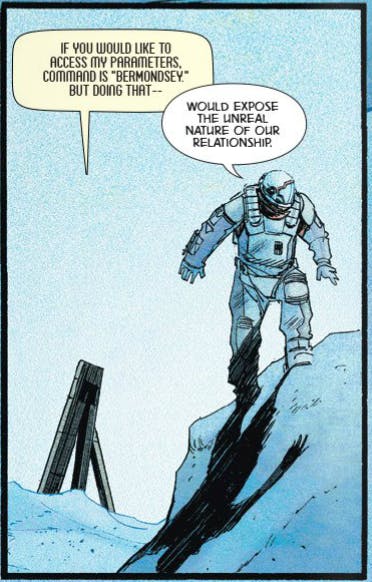 Nolan’s Interstellar comic sees Mann and his robot companion KIPP exploring the desolate ice planet where his ship has landed. Unlike Cooper (Matthew McConaughey) and Brand (Anne Hathaway), who tease the robot TARS and generally treat it cordially, Mann seems far more aware of the false nature of the robot-human relationship. After all, KIPP is a computer who is programmed to keep Mann company on his lonely mission. When viewed as a response to 2001: A Space Odyssey’s HAL 9000, Mann’s attitude toward artificial intelligence is one of the most interesting aspects of the world Nolan created in Interstellar.