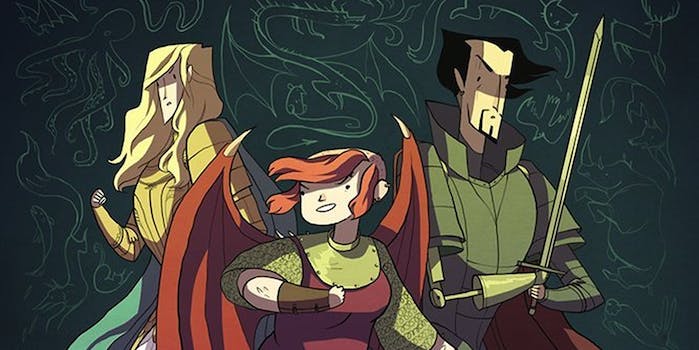 Beloved webcomic ‘Nimona’ is being made into a movie

Groundbreaking comic headed to Hollywood. Here's why you should be excited.

Fox Animation has picked up the rights to make the film adaptation of Nimona, the webcomic turned graphic novel from Noelle Stevenson, according to the Hollywood Reporter.

Although Vertigo Entertainment optioned the movie rights to the film last month, it’s now changed hands in what’s being called a “competitive situation.” Patrick Osborne, who directed the Oscar-winning short Feast that debuted before Big Hero 6, will direct the film with screenwriter Marc Haimes set to write the script.

Stevenson started Nimona back in June 2012 while she attended the Maryland Institute College of Art, which ended up being her senior thesis. Mashing up tropes and genres, it told the story of a young shapeshifter who joins forces with a former knight-turned-bad guy to commit villainy and eventually overthrow the medieval-esque regime.

After its completion, it was printed as a graphic novel by HarperCollins and published last month, which became a New York Times bestseller. Stevenson is currently nominated for an Eisner Award for Best Digital/Web Comic for Nimona.

Lumberjanes, the comic Stevenson writes with Shannon Watters, Grace Ellis, and Brooke Allen, is also being adapted into a film.