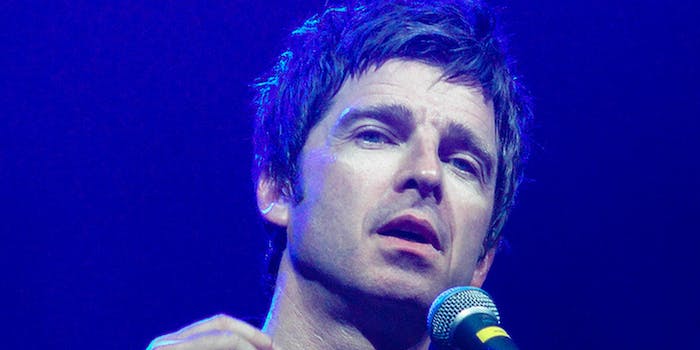 “I have to say, in all these videos, if you need four guys to walk around in slow motion, we were the best at that.”

Oasis guitarist Noel Gallagher is notoriously opinionated, as is his brother, singer Liam Gallagher. Recently, we got a glimpse into what he thought about Oasis’s videos from the height of their popularity, on into their more embarrassing work. He looked back not in anger, but, well, in anguish.

Redditor NailgunYeah posted Gallagher’s commentary from Oasis’s 2010 Time Flies DVD yesterday and—surprise!—he proceeds to roast every one of their videos. The DVD came as part of the Time Flies box set, so it’s possible only die-hard fans have seen the commentary. Until now.

As one commenter observed, Gallagher’s deadpan critique sounds a bit like Karl Pilkington’s from the Ricky Gervais-produced travel show, An Idiot Abroad. Here are some of the F-bomb-filled highlights:

“Was there really all these birds in this video? It’s like a fucking scene from Britain’s Next Top Model.”

“Oh, I was fucking drunk in this video.”

“Fucking bag of shite there. Waste of a fucking afternoon.”

“I have to say, in all these videos, if you need four guys to walk around in slow motion, we were the best at that.”

“If anybody’s listening to this at home, you’d be advised to probably go and mull the fucking garden, because this goes on for ages.”

Important context: The Mr. Show sketch where they parody Noel and Liam Gallagher.