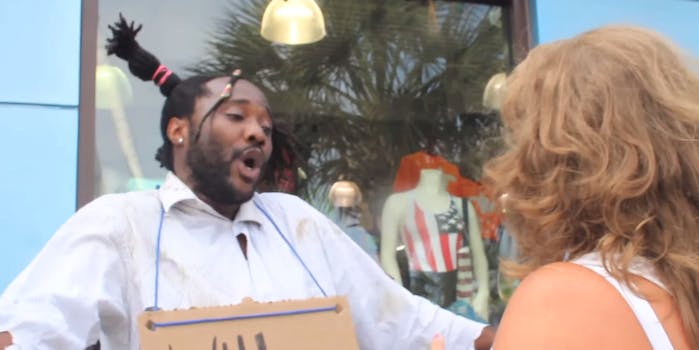 But was he really just 'discovered'?

More than 100,000 people have turned to YouTube to watch the South Carolina singer No Cash sing John Legend and Drake on the southern California streets.

Under a page run by the comedy collaborative SpikeFe, he stands on the streets telling passer-bys he’ll “work for food.” Videos of him singing say he’s homeless, but there’s a growing suspicion it’s actually all a set up.

This has nothing to do with No Cash’s singing abilities. The story of the homeless man with the golden voice is well documented. It’s the assembly, rather, and the way No Cash is being presented.

To make nothing of the production backgrounds of the group behind the videos—you rarely see Nicki Minaj response videos next to cutting-edge societal documentaries—there’s the general demeanor of the man: a homeless rapper who shills Doritos and maintains an active Twitter page. No Cash is clean in the face, kept in the hair, fully endearing, and wearing an ear ring.

The New York Daily News identified the singer as Byon Artell McCullough, 28, of Florence, SC, and reported that he turned to homeless singing after serving three-and-a-half years in prison on drug charges.

But a Dec. 2013 video from Byon McCullough’s personal YouTube page shows the character driving into a neighborhood in a new Jaguar singing all jingly about J.G. Wentworth structured settlements and annuity plans.

So is he homeless? Who cares? 90 percent of musicians crash on couches anyway. And also eat Doritos.

But rarely do they ever drive Jaguars.