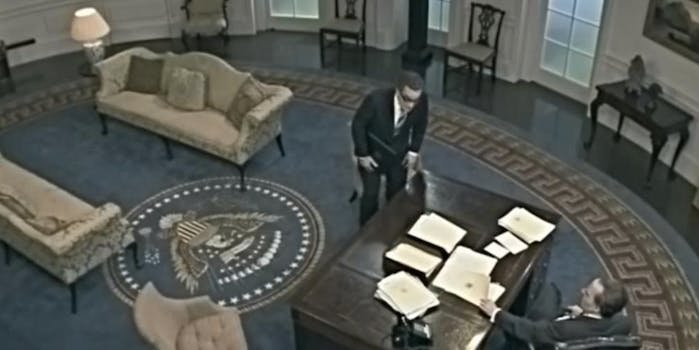 ‘Nixon’s The One,’ Harry Shearer’s bio-comedy, lands on YouTube

Relive the Nixon era like it was yesterday, not depressing.

For those who lived during Richard Nixon’s presidency, it’s difficult to forget his smiling face adorning the red, white and blue campaign button for his 1968 campaign. It read: “Nixon’s the One.”

Nixon will always be the one. And now we can relive that era all over again with comedian/renaissance man Harry Shearer’s masterful six-part series, Nixon’s The One, which has made its way to YouTube after a successful run on British TV.

Under the My Damn Channel banner, the show will debut a new episode each week beginning with the pilot, a 21-minute historical tour de force based on the infamous White House tapes. With minimal makeup, Shearer is remarkable in his ability to capture the personality and mannerisms of the 37th president with uncanny realism.

Shearer and historian Stanley Kutler studied hundreds of hours of the White House tapes with the purpose of capturing and staging a number of Nixon’s oddest and unintentionally hilarious moments inside the Oval Office. The show first aired back in 2012 as a one-episode TV special on the Sky Arts channel in the U.K. with an outpouring of praise, which led to the production of five additional episodes.

The pilot of Nixon’s The One exposes Nixon as a megalomaniac narcissist as he fishes for praise from Henry Kissinger (played brilliantly by Henry Goodman) for a minor speech he gave about the U.S. position in Vietnam. Later, in reaction to some financial issues facing his pal Reverend Billy Graham, Nixon rails against Jewish people for getting favoritism from the Internal Revenue Service. And then there’s the marketing lesson the president gives dairy-farmer lobbyists over their need to downplay the role they played in raising cholesterol.

The pilot skips around from 1971 to 1973, but continuity is never an issue. Each segment stands well on its own, but the thread of Nixon’s paranoia and singular point-of-view on race, religion, and world politics carries seamlessly through the opening episode.

Despite a string of commercial and financial successes, Shearer generally avoids the limelight, focusing more on smaller projects, such as a public radio show and the social and economic issues of his hometown, New Orleans. His film, The Big Uneasy, is a critically acclaimed look at New Orleans prior to and after Hurricane Katrina. For most TV fans, Shearer is best known as the voice of a range of Simpsons characters, including Principal Skinner, Monty Burns, Waylon Smithers, Ned Flanders and Reverend Lovejoy. He was also a member of Saturday Night Live circa 1979. In films, Shearer is part of the troupe featured in such faux-documentaries as Spinal Tap and A Mighty Wind.