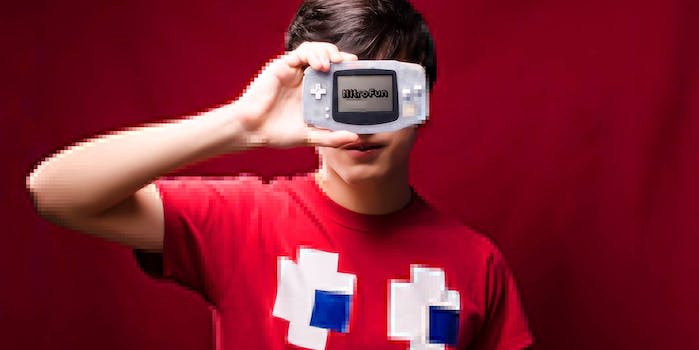 When Gustavo Rangel was 14, he started producing electronic music— moving from a Skrillex-like sound to tunes influenced by gaming culture. A year later, in 2012, he signed with EDM and dubstep label Monstercat, becoming the label’s youngest artist.

Known mostly by his artist name Nitro Fun, the San Luis Potosí, Mexico-born and raised Rangel has been an avid gamer since he was four. He’s obsessed with Pokémon. When we sat down with him at DreamHack Austin in May, he was wearing a Pokémon shirt, and made a point of mentioning that he has an 8-bit Pokéball tattooed on his deltoid. He particularly likes the generation three games, released in 2002. His favorite is Emerald, because “they just did everything right with that one, there’s a really good story, the map is huge.”

Since its North American release on July 6, Pokémon Go has taken over the world. Rangel likewise loves it, calling it one of the best games of his generation.

“I think everyone’s going to remember it a few years down the road,” he says via email. “I love the fact that it’s a game where you actually have to go out to play it… you’re catching Pokémon in the real world, that was always a childhood dream of mine. Now we just gotta wait and figure out a way to make Pokémon robots so we can actually bring them to life!”

It’s a relentless hobby, but he’s also brought that unsinkable craftsmanship to his music.

“I feel really happy with the sound I have, the video games and stuff, it identifies me,” he says. “Chiptune is kind of like the sound of nostalgia and all video games… People like my music because it reminds them of games they used to play when they were young.”

He’s not wrong. In every track you can hear influences of Mario Bros. and other games mixed in with the electro beat. Songs are called things like “Final Boss” and “Checkpoint.” The song art makes the connection to gaming even more explicit (8-bit pixel art, a pair of friends sitting on a couch, controllers in hand)—most of it was put together by the Monstercat design team.

This week his music was featured in the trailer for the new side-scrolling, 2D Sega project, Sonic Mania. His warmly stitched-together soundscapes fit the nostalgic project like a glove.

Rangel is attacking a streaming landscape overrun with feel-good pop and stale electronica. While there are artists who play games and are involved in the scene—like Deadmau5 or recent Twitch convert T-Pain—he’s ushering in a new era of young musicians who grew up as gamers and likewise crank out music overrun with throwback gaming influences.

It took the teen trailblazer a while to get there. When he started producing, Rangel mostly copied other artists like Skrillex. His work went nowhere.

“Dude,” he remembers thinking to himself. “No one is paying attention to you. Why?” It hit him hard: He was just another EDM clone, tinkering and following. That’s when he made the gaming connection.

Rangel’s musical revelation and pivot happened around 2012, and it didn’t take long for people to notice him—including Monstercat. But when he signed, he says, he felt completely alone.

“Monstercat isn’t really big in Mexico, so when I tried to talk to other people about it and that it was really cool for me, they would just shrug it off,” he says.

For his age, Rangel is extremely self-aware and critical. He understands that without modern connectivity his situation would be very different: “All of this happened in the internet, because there’s no way of this happening to me in real life.”

Rangel sees parallels and intersections between the two genres that most don’t notice.

“I think it’s kind of like a bridge that a lot of people are afraid to take,” he says of adding game sounds to music. “I don’t know why, but I feel like some people think that it’s kind of worn out already. Like nobody will like that stuff because it’s old. I think it’s really cool to implement it.”

His games of choice? He plays a lot of Halo, preferring the console—his first was a PlayStation 1—to the PC because he feels more in control. On occasion he also plays Super Smash Bros.

But these days Rangel is focusing on redefining the Nitro Fun sound, broadening his scope to make his music more modern and expand his audience. He says fans should expect a lot of different tracks from him soon, describing it as “heavier, bouncier, and better.”

Last week he went on a self-imposed social media ban to work:

I'm gonna take a break from Twitter to focus on music. See you later guys :)

His work-life balance is down to a science. After all, he’s also a teen avidly awaiting the new Pokémon Sun and Pokémon Moon games.