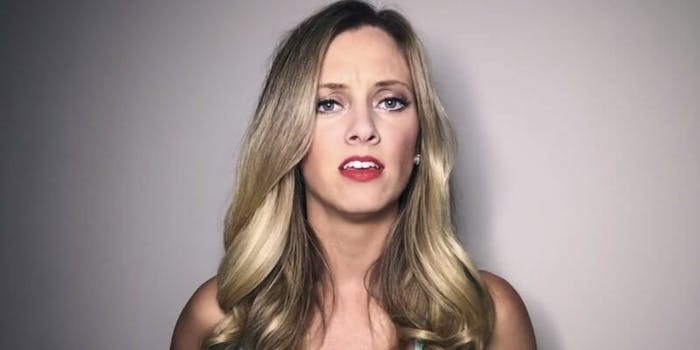 The Canadian YouTuber is inserting herself right into controversy again.

In one simple video, Nicole Arbour has made herself the enemy of the pro-choice and pro-life camps all at once.

Arbour made waves earlier this month with her “Dear Fat People” video, which caused outcry from the YouTube community and lost Arbour an acting job on Don’t Talk to Irene with director Pat Mills.

Her new video, titled “Why Abortion is WRONG,” is a bait-and-switch ploy: She goes on to talk about how she has a theory that “some kids were supposed to be aborted and turned into murderers and crazy people” and “if more kids were aborted, less kids would be on ADD drugs.”

Arbour’s video appeared amid the #ShoutYourAbortion social media trend and the passage of a bill to defund Planned Parenthood in the coming year. As with her last video, Arbour is being met with criticism, although neither liberal nor conservative viewers can decide just whose side she’s on.

@NicoleArbour the trouble is that no matter what controversial topic you choose, it doesn't hide the fact that you're not funny.

Dear @YouTube I beg you to please remove Nicole Arbour's account. The rest of us can generate ad revenue in a POSITIVE and FUN way.