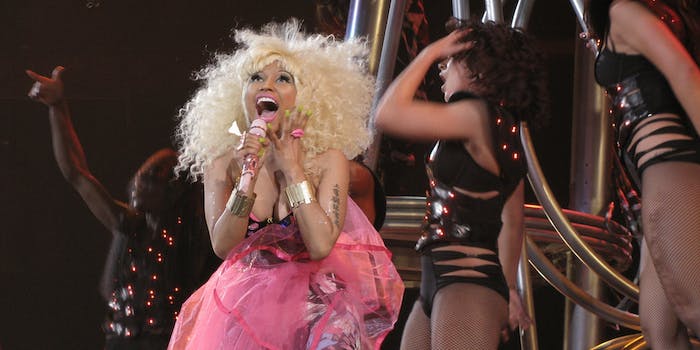 Even the skiniest of models can still shake it. Well, kind of.

Nicki Minaj has been subjected to think pieces, fart jokes, and scathing reviews from grandmothers all because of the prominent perky posteriors in her music video for “Anaconda.” But while the song samples the classic Sir Mix A Lot track “Baby Got Back,” Minaj has taken to the streets to prove that the message of the song is less about body shape and more about embracing your inner curves, or something like that.

In her latest philanthropic effort, Minaj went backstage at fashion week on Saturday to help out some models who were in desperate need of a little snake-handling guidance.

In a series of vines posted to the Vogue magazine account, Minaj staged an intervention to help the waifish models work what little they do have with attitude. While their gaunt figures look almost comical compared to Minaj’s voluptuousness, it didn’t stop them from giving a spirited yet awkward performances in six-second bursts.

If you’ve ever wondered what wild club nights you missed by not studying abroad in Prague during college, this basically sums it up.

We’ll give the girl to Minaj’s left a pass for not being able to lift her leg all the way in the air; those boots do look rather heavy.

Photo via carnivalridexx/Flickr (CC BY 2.0)