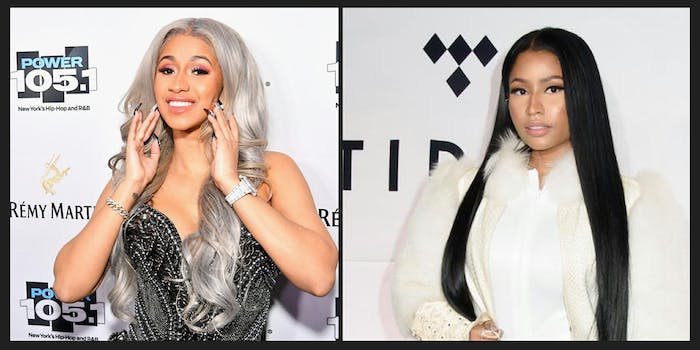 Who rapped better on the new Migos song: Nicki Minaj or Cardi B?

The internet is divided.

When Migos dropped their newest single, “Motor Sport”—which features both Nicki Minaj and Cardi B—Friday morning, no one could agree which rap queen went harder on the track.

Hardcore Minaj fans were quick to point out that she had the longest verse of the song, which also switched up the flow of track with her tongue-twisting disses. They also argue that not only does she rap harder than Cardi, but this might be her best verse this year.

Na wtf @NICKIMINAJ really switched her fucking flow 4 times on #motorsport yikessssss one of her best verses this year!!!!

The Only Reason I’m Buying This #MotorSport Song Its Because Nicki Minaj Is On It.. pic.twitter.com/b9pVPgaKGb

Cardi and Nicki are no longer comparable after MIGOS #motorsport. Cardi held her own but Nicki gave multiple flows, metaphors, punchline,ETC pic.twitter.com/z84dcDqGBn

Cardi B, who’s a new sensation in the rap game, doesn’t necessarily boast the same following as Minaj. Her fans, however, did show massive support for the artist and recognized what a big deal the collaboration with Migos and Minaj was.

Cardi's verse on #motorsport > the rest of the track

Although the two artists seem to hurl insults back and forth at one another through their verses, the team up on “Motor Sport” actually marks the first ever collaboration between Minaj and Cardi B.

Many fans of the two rappers pointed out that there is no need to pit the two women against one another. Instead, fans should be excited about the support for another displayed by the collaboration.

This isn’t the first time Minaj has shown loyalty to Cardi B. After Cardi B surpassed Taylor Swift on Billboard’s Hot 100 and became first solo female rapper to top the Hot 100 since Lauryn Hill in 1998, Minaj tweeted in support of Cardi B.

“Congratulations to a fellow NEW YAWKA on a RECORD BREAKING achievement,” Minaj tweeted. “Bardi, this is the only thing that matters.”

Congratulations to a fellow NEW YAWKA on a RECORD BREAKING achievement. Bardi, this is the only thing that matters!!! Enjoy it💕💞🎀 @iamcardib

At least fans can all agree that the two female artists totally upstaged Migos on their own track.