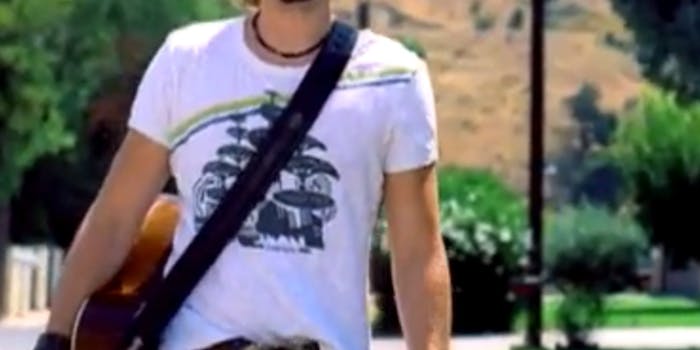 Nickelbacking: The cruelest trick you could play on friends

“Look at this photograph. Everytime I do, it makes me laugh.”

If you can’t identify that lyric yet, just wait. It won’t be long before those 11 words are pumping through your computer speakers—cutting into your earholes with razor-sharp precision at the worst time possible.

It’s something Mashable’s Christine Erickson learned the hard way this weekend while doing research for a story on Tumblr. Erickson came upon a link to an article titled “Secret Tumblr Tricks,” but when she clicked on the story, she found no such article. Rather, the link redirected to a YouTube page playing Nickelback’s “Photograph,” a tremendously terrible song from 2007.

Such is the first publicized case of Nickelbacking, an act now considered the favorite to supplant rickrolling as the ultimate Internet bait-and-switch. It’s a meme so cruel that anybody with half a soul wouldn’t wish it on their most hated Canadian power ballad quartet.

The gist, for those unfortunate souls who’ve never subject to a rickroll before: Person A sends a supposedly legitimate link to Person B that is actually a hidden link to an awful song. That song gets played, Person B smacks his/her hand on his/her forehead, reports that he/she’s been “had” by Person A, and Person A has a good laugh at his/her friend’s expense.

The problem with “Photograph,” however, is that linking to the song leads to a preroll advertisement. It’s better than the song, sure, but it sort of defeats the purpose of the prank.

Rickrolling, the first and most famous iteration of the prank, recently got so popular that AVG Technologies temporarily removed the song from YouTube.

We can only hope that “Photograph” meets a similar, albeit much more long-lasting, fate.