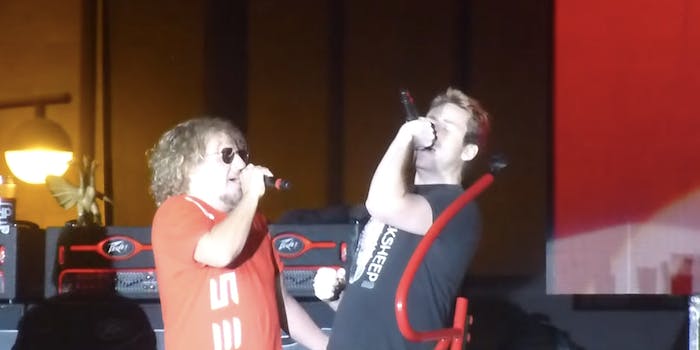 Of course, the Internet isn't having any of it.

Everyone knows that Nickelback is pretty much one of the most despised bands on the planet. But as this publication and many others have pointed out, its reputation is somewhat unmerited, considering that the band just isn’t really that bad.

Nickelback frontman Chad Kroeger recently proved this with a performance of the Led Zeppelin classic “Whole Lotta Love” at Van Halen singer Sammy Hagar’s 67th birthday party in Las Vegas. And you know what, guys? He kinda killed it!

Now, as any Zeppelin fan knows, Robert Plant’s vocal abilities were pretty much otherworldly, so those are some pretty big shoes to fill. But the former Mr. Avril Lavigne pulls it off, hitting every note and growl and yelp with admirably Plantian swagger.

Of course, because Kroeger is the frontman for Nickelback, not everyone is willing to let him have his moment in the sun. One YouTuber likened the performance to a cover by “the world’s best karaoke band,” adding, “the fact that people are ‘appreciating’ it just shows how low the ceiling is for acceptable.” Uproxx was similarly skeptical, writing that although Kroeger did a “decent job” with the cover, “by ‘decent job’ I mean Kroeger managed to not totally decimate the song and turn it into usual Nickelback fodder.”

Haters, they gonna hate.  Keep doing your thing, Kroegs. You can give us every inch of your love anytime.