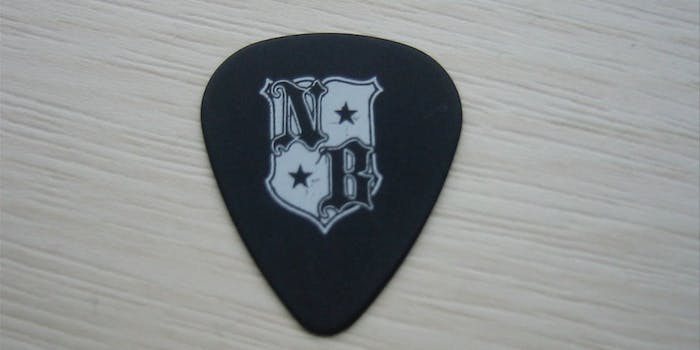 Nickelback wrote a song about Ferguson for some reason

Kroeger and Co. rage against the vaguely outlined machine.

Nickelback’s latest single, “Edge of a Revolution,” is a glass case of emotion. The song is a sharp departure for Chad Kroeger and his band of storied philosophers in that it is explicitly about… stuff that is bad and sociopolitical. Apparently, Kroeger tells Yahoo Music, that includes the shooting of Michael Brown and the unrest in Ferguson, Mo.:

I don’t know if North America is on the edge of a revolution, but I wanted it to feel that way in the song, since it feels that way in so many other parts of the world. You turn on CNN and it’s like, “Wow!” We’d have it on for 15 minutes and we’d have to shut it off because it was so depressing. The state of affairs in the world these days is so dismal. And I think that’s where the song definitely came from. While we were working, the [shooting of Michael Brown in Ferguson, Missouri] was a major story and there was rioting like crazy. So it definitely felt like the seeds of revolution were being planted.

The tragic Michael Brown shooting occurred on Aug. 9, and “Edge of a Revolution” came to the rescue on Aug. 18, when it was released as a single. But because it is more or less obtuse in terms of what it refers to (Wall Street gets put on the proverbial Summer Jam screen, and I think it’s fresh how Kroeger rhymes N.S.A. with C.I.A.), the world wasn’t hip to Kroeger’s artistic process for this track until this month.

Certainly, “Edge of a Revolution” is a joke show. The lyrics are hardly fit to caption an eighth grader’s doodles. It’s also not a particularly brave thing for a rock & roll band to do; hell New York Knicks owner James Dolan wrote a song about Trayvon Martin this summer. The reality is that crunchy white dudes love to riff about hypothetical revolution because imagery about riots and mind control fits nicely with one-note, post “Hey Man, Nice Shot” bass plucking; plucking that looks gnarly if the bass player is simultaneously thrusting.

Look, Nickelback is the type of band you see in Ottawa with a Groupon. It is immune to haters and has thrived as a pop mainstay for almost 15 years. That Kroeger felt inspired to incorporate a tragedy into his trade reveals his humanity and spirit. He’s the kind of doorman that calls you “brother” after he checks your ID. The world’s collective progress is fueled by these individuals, and I hope to someday buy the man a Molson Ice. “Edge of a Revolution,” I’mma let you finish.