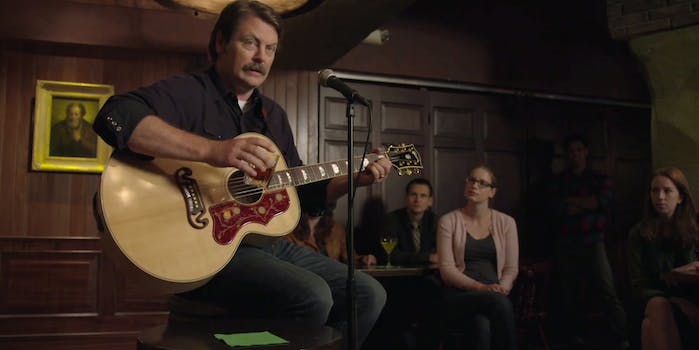 These are some of the most dulcet tones in history.

It’s often hard to tell where Parks and Recreation’s Ron Swanson ends and actor Nick Offerman begins. Both have thick moustaches, love Megan Mullally, and enjoy the fine art of woodworking. Actor and character also share a passion for a certain dark Scottish spirit—but only one has taken to his guitar to sing about them.

Yes, Nick Offerman has turned himself into a troubadour on behalf of Diageo spirits. The makers of fine single malt whiskeys like Oban and Lagavulin asked the actor to saddle up in the Scottish isles and sing a song about his devotion to the drink.

Watch Offerman ride horses through moors, cut peat, herd sheep, and generally be a manly Scot while he strums a delightful tune about his love of whiskey.