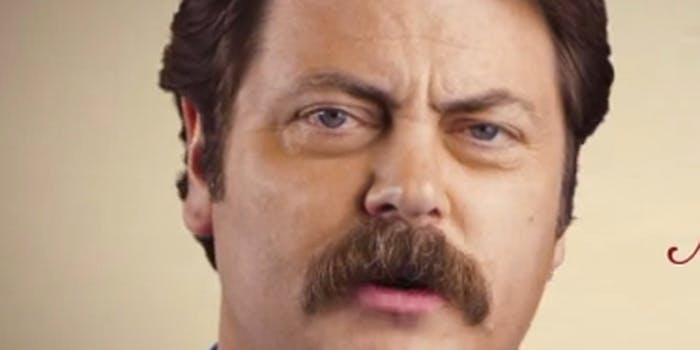 At a time when disgruntled Movember participators might be staring at their sparse mustaches thinking they’ve made a huge mistake, spokesman Nick Offerman has come forth with a message: it gets fuller.

Better known as the manly Ron Swanson from Parks and Recreation, Offerman is Movember’s spokesman, which encourages men to grow mustaches to raise money and garner support about men’s health issues.

In a new video, the comedian reminds mustachioed participants to ignore those who would taunt them with “dirty hipster” or “Ugly Geraldo.” After all, he posits, if you’re rocking the “in-between mustache,” you’re not alone.

“We’ve all been there, it gets fuller.” assures Offerman. The ambassador to manhood previously starred in a video solo but is joined this time by The Office stars Oscar Nunez, Jack Lacy, and Brian Baumgartner.

Offerman ends with a message for those struggling through the embarrassing mid-mustache phase.

“Let them know, without judgement, that it gets fuller,” jokes Offerman, a light-hearted joke parlaying off the It Gets Better campaign that supports gay youth. “Whether you’re a wife, parent, friend, or child, tell those in-betweeners that it gets fuller.”

With just two weeks left in November, now is not the time to give up. It takes time to grow something as awesome as Offerman’s upper lip majesty. That awkward Jack Sparrow-like caterpillar will soon turn into a full-fledged mustache that will make everyone envious.