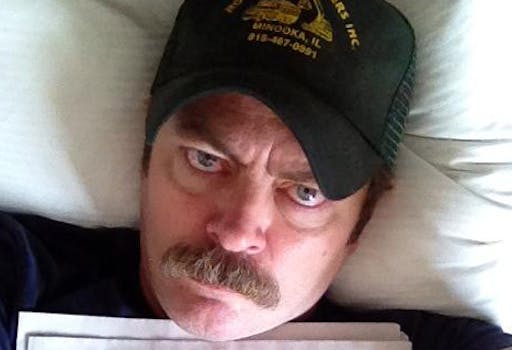 Nick Offerman lets Reddit ask him (and Ron Swanson) anything

In some ways, Offerman is a lot like his Parks and Recreation character, but as he explained to redditors Friday, there are differences, too.

Nick Offerman and his most famous character, Parks and Recreation’s Ron Swanson, have a lot in common. Both are master craftsmen. They have identical mustaches. Swanson even has an IMDB page that looks suspiciously like Offerman’s. But while Swanson is something of a luddite, his real-life counterpart braved the computer to let Reddit ask him anything.

While a few of his answers could have easily come from the show (the best way to cook bacon and eggs is “In an iron skillet, over a fire of oak at your cabin,”) at least a few answers highlighted the differences between Offerman and Swanson.

I know you and your character have a lot things in common, in what ways are you drastically different from Ron? (cokobunner)

I wouldn’t call it drastic, but my penis is 5/8″ larger than Ron’s, in both length AND breadth, but it is held that he wields his with greater aplomb.

Are your political stances similar to Ron Swanson? (heycheeahs)

Well, I just went to discuss this question with Ron, and I found him staring stoically into a fire in which burned his VHS collection of Dirty Harry movies whilst he seemed to be mumbling the words to the Beastie’s High Plains Drifter, and welling up. I would not have expected Ron to be aware of Paul’s Boutique, I guess that seminal record really penetrated the generations. Anyway, I left him to his thoughts.

Living in Chicago in the mid-90s; did you ever feel like joining the ever-popular improv scene? (FkYouFlipFlops)

No, I did not. The comedy world and the “straight theatre” were very self-contained, very autonomous groups, and I was in 100% ignorance to that fecund chuckle-field. I was working on plays, mostly with my company, The Defiant Theatre, 24/7, so it was all I could do to see another play that a friend was in, let alone go see comedy.

When you play monopoly, which piece do you choose to represent you on the board, and why? (ambrosius23)

I choose the thimble because no matter where I roam, you can’t prick my motherfuckin’ thumb with your bitch-ass Scottie Dog. Can I cuss on here?

How much action does your mustache see? (M374llic4)

What’s a typical evening at home like with Megan [Mullally, Offerman’s wife]? (CalamityJane1852)

Oh, gosh. Well, we get dressed up as Marx Brothers (she’s always Groucho or Harpo, and I’m Chico…whatever, she made the outfits.) and we get sauced on Gin and goofballs and run around the yard, sometimes with a lot of horn-honking, and then I set up the target rings at which Megan fires ping-pong balls and sometimes racquet balls from her vagina, often racking up an impressive tally of points (she got a 420 last night!), while I assemble my black powder muzzle-loader collection and fire lead balls at our neighbor, Charlie Sheen’s secret wife’s mom’s jungle cats (I miss on purpose, I’m not a dick.) Normal Hollywood shit.