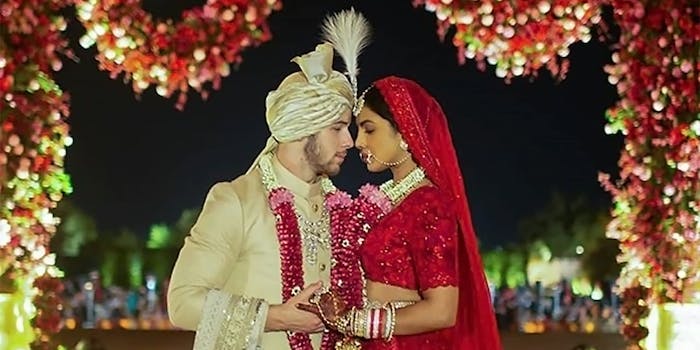 The wedding festivities are still happening.

Priyanka Chopra and Nick Jonas got married over the weekend, and it’s time to jump down the rabbit hole that was (is?) their lavish, multi-day wedding.

Actress Chopra (Quantico) and singer Jonas, who had been dating since May, got married in two separate ceremonies in Jodhpur: One traditional Hindu wedding, including the pre-wedding Mehendi; and one traditional Christian wedding, which featured Chopra in a 75-foot veil.

One of the most special things that our relationship has given us is a merging of families who love and respect each other's faiths and cultures. And so planning our wedding with an amalgamation of both was so so amazing. An important part of the pre wedding rituals for the girl in an Indian wedding is the Mehendi. Once again we made it our own and it was an afternoon that kicked off the celebrations in the way we both dreamed. @nickjonas

Game of Thrones‘ Sophie Turner, who is engaged to Joe Jonas, was quickly turned into a meme.

The two families had a choreographed dance-off for the pre-wedding Sangeet, and it looked like something from a movie:

Priyanka and I have been looking forward to the Sangeet (the musical evening and a pre-wedding ritual) to see what each side of the family had put together. We’re both so full of gratitude for the effort and the love put forth by both families. What an amazing start to a lifetime!! @priyankachopra

The wedding is still going on, with a reception happening on Tuesday that will feature Indian Prime Minister Narendra Modi. Earlier this year Chopra revealed how the two started talking: Jonas texted her and said “I think we should connect.” Looks like it worked!