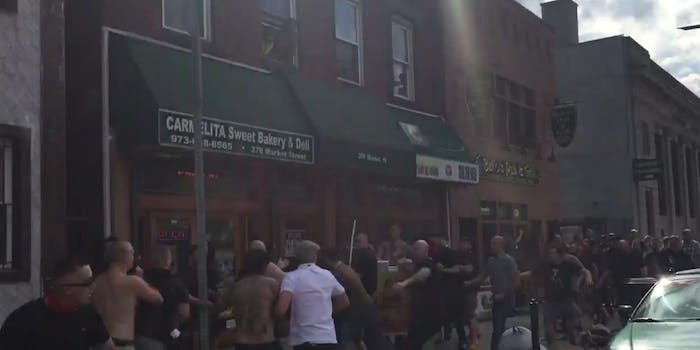 Soccer-inspired MLS fight breaks out prior to NYC rivalry

According to the Twitter account of Associated Press reporter Rob Harris, fans of the New York Red Bulls and New York City FC went toe-to-toe outside of Newark, New Jersey’s Bello’s Pub and Grill Sunday afternoon ahead of the evening’s derby (a European team for rivalry).

Bello’s has been used previously by New York Red Bulls’ supporters group, Garden State Ultras, as a meeting point before games, according to the group’s Twitter account @ultras_gsu.

HUDSON DERBY DAY A FEW HOURS AWAY! GET DOWN TO BELLOS PUB IN NEWARK TO GET SOME DRINKS IN, AND THEN HEAD OVER TO THE STADIUM!

According to the group’s Twitter page, it was founded in 2005 and it says that “Garden State Ultras is a European ULTRA style of support for the NYRB.”

.@RobHarris I suspect these are NYC ultras looking for retaliation of when GS Ultras allegedly attacked fans near YS https://t.co/g1zh3Ny3bz

Soccer Newsday columnist Nick Chávez who writes primarily about New York City FC-related matters speculated on his Twitter account that the skirmish could have been in retaliation to a previous alleged incident at Yankee Stadium between the two groups. ?

Harris later tweeted again with a photo before the previously tweeted video was recorded.

Just before it turned violent pic.twitter.com/bqMLtN4mqE

Soccer fans have wanted the game to cross into the United States for a long time, and certainly as the MLS continues to develop and lure in a global collection of top talent. But with that, apparently, comes the partisan violence that accompanies the sport wherever it becomes popular.