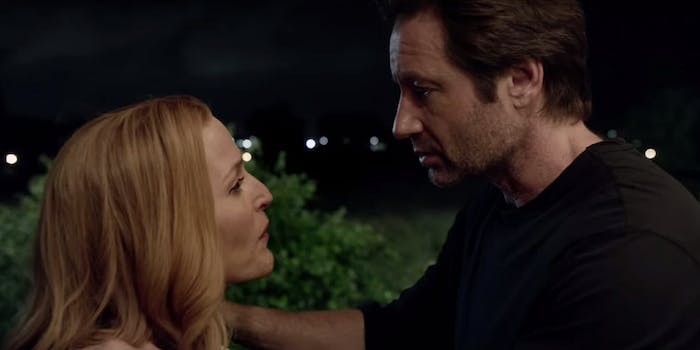 Welcome to your 21st-century nightmare.

At last the trailer for Fox’s revival of The X-Files is here, and it’s time to relive your most delicious ’90s nightmares because it looks like the whole crew is back—and things are weirder than ever.

Mulder, Scully, Skinner, and even a certain Morley-smoking mystery man are all back for the new series, and no one’s aged a day. Mulder looks typically haggard, but we have faith Scully will whip him into shape soon enough—if she can keep the breathlessness out of her voice, that is.

The best part of this trailer is that it feels totally contemporary without ever losing sight of what makes the X-Files great. From the “fire sale” prediction voiced by a member of Anonymous to references to the National Security Agency and government surveillance, to a stalwart military officer with echoes of Chelsea Manning and Edward Snowden, this trailer rapidly and easily makes clear that we’re all finally living in Mulder’s reality.

Along with the aliens, of course.

Are we excited for January, or are we terrified? We don’t know, but we’ll be tuned in to find out.