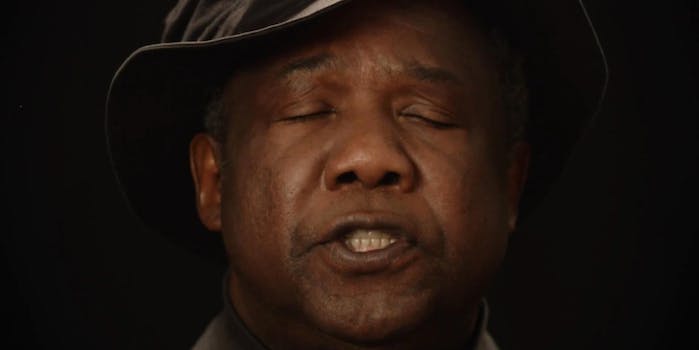 The secret to the most famous catchphrase from ‘The Wire’

Actor Isiah Whitlock Jr. teaches you how to say his famous (NSFW) catchphrase.

Isiah Whitlock Jr. has appeared in a large body of work over the past few decades, ranging from classic films like Goodfellas to TV shows like  Blacklist and Veep. But, on the street, he’s probably most recognized for sheeeeeeeeeit. It’s that word—sheeeeeeeeeit—that become a cultural phenomenon when Whitlock’s character Clay Davis said it a lot on HBO’s classic series The Wire:

With The Wire now re-airing on HBO with an HD overhaul, a whole new generation of Internet-goers are being introduced to Clay Davis and his sheeeeeeeeeit for the first time, and Whitlock has teamed up with The Levity Department to launch The Whitlock Academy, a webseries in which he teaches budding actors how to properly say their very own sheeeeeeeeeits:

“The catchphrase has dominated his life, and we wanted to have a little bit of fun with that in producing The Whitlock Academy,” Richard Hine, head of The Levity Department and the series’ producer/cowriter, told the Daily Dot. Before collaborating on The Whitlock Academy (Hine and Whitlock split writing duties on the episodes, although there’s always room for improvisation, too), Hine initially met Whitlock while helping him get acquainted with Twitter. “He has a lot of fun with Twitter and enjoys interacting with fans,” said Hine, “and obviously most of the interaction revolves around his character of Clay Davis and The Wire.” After getting Whitlock settled into Twitter, Hine introduced him to Vine; fittingly, here’s the first vine that Whitlock shared:

Although most people know Whitlock’s sheeeeeeeeeit from The Wire, that wasn’t actually his first time to say it: That distinction goes all the way back to 2002, in Spike Lee’s 25th Hour. And that’s why, if you try to say sheeeeeeeeeit without proper training, it’s just not going to work; it took Whitlock himself 12 years just to go from being awesome at it to being ever so slightly more awesome at it, so starting from scratch isn’t going to produce pretty results.

“There are certain rules,” said Hine, “like ‘sheeeeeeeeeit’ always has to have nine E’s and one I…”

“There are certain rules,” said Hine, “like ‘sheeeeeeeeeit’ always has to have nine E’s and one I, and the actor has to be able to feel all those E’s if they deliver it—otherwise they’re not really doing it justice.” More rules are likely to be rolled out in the series’ initial run of three to four episodes—the first one introduces the Academy well enough, but Hine says the rest will follow different formats and elaborate more on how to properly hone your sheeeeeeeeeits. After the currently shot material all makes its way online—editing of episode 2 is currently wrapping up—Whitlock and Hine will see how many people have enrolled in The Whitlock Academy and decide whether more lessons are warranted. “We recorded a few episodes, and we’re going to put them out there and see what happens,” said Hine. “If people like it, we’ll try and do more and continue to have fun with it.”

If anything can be learned from viewing the first episode, it’s that the conceit of Whitlock mixing sheeeeeeeeeit with Shakespeare could easily sustain 100-plus episodes all by itself, and we know there’s no shortage of technique to be shared on the matter. At the close of the first episode, Whitlock compares perfecting your sheeeeeeeeeits to the titular character of Jiro Dreams of Sushi—the acclaimed documentary about a man who spends his entire life honing the art of making perfect sushi. After viewing the The Whitlock Academy‘s debut, Jiro director David Gelb offered Hine a line for a future episode: “Proof that it takes a lifetime to master your sheeeeeeeeeit.”

“Proof that it takes a lifetime to master your sheeeeeeeeeit.”

While the first block of episodes roll out—all directed by New York filmmaker Assal Ghawami—Hine encourages fans to tweet their own sheeeeeeeeeit vines to @WhitlockAcademy, where they’ll retweet them and share them with Whitlock himself. “We’ll have Isiah judge the ones we select,” said Hine. You can get more info on the webseries at www.thewhitlockacademy.com, and also at www.sheeeeeeeeeit.com (yes, it really works).