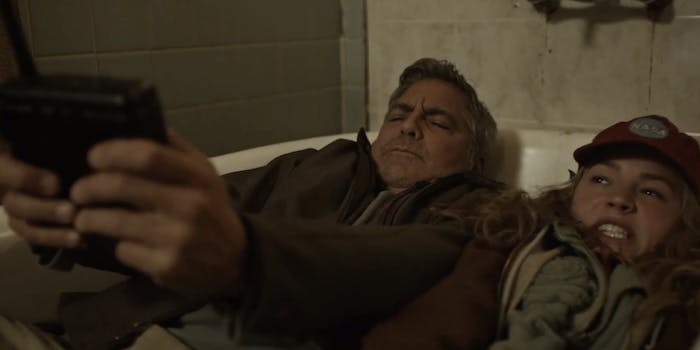 New ‘Tomorrowland’ trailer finally shows what George Clooney is up to

There's more to the film than just a girl touching a pin.

After months of mystery, the newest Tomorrowland trailer is finally showing fans what the highly anticipated Disney film is about.

A new trailer out on Disney’s U.K. channel goes beyond previous teasers that revealed simply a magical pin that transports the protagonist to a futuristic field. Now we can actually see more of the characters and designs of Tomorrowland, as well as get some clues as to the structure of the film.

Now we know George Clooney lives in a house guarded by a dog hologram, and has some sort of bathtub ejector seat in case of emergencies. We also learn a little more of the plot, which revolves around a chosen girl and the limited vision she saw in previous trailers was, “a place where the best and brightest people in the world came together to actually change it.”

We don’t know how, or why, or what they’re changing it from, however. Fans will only have to wait until May 22 to get the full picture, when the film hits theaters.