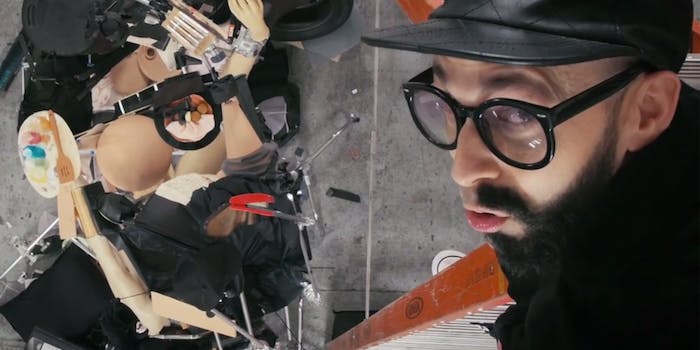 OK Go’s latest elaborate video is out, and it’s bonkers

We're pretty sure they spent the last two years trying to dream up ways of outdoing themselves.

It’s been two years since treadmill-loving rockers OK Go last released one of their elaborate, one-take videos. And judging from the complexity of their newest effort, “The Writing’s on the Wall,” they spent most of those two years holed up in a Brooklyn warehouse, dreaming up ways to top past efforts like “Here It Goes Again” and “This Too Shall Pass.”

READ MORE:
OK Go singer Damian Kulash discusses the making of “The Writing’s on the Wall”

“The Writing’s on the Wall,” which reportedly took 50 takes to get right, uses a series of forced-perspective optical illusions to make it appear as if the band members are walking through solid objects, riding upside-down bicycles, and getting sliced in half by giant mirrors.

This is the first video from OK Go’s forthcoming fourth album, Hungry Ghosts, which is due out in October. The band is self-releasing the album and crowdfunding it via PledgeMusic, where fans can purchase anything from a signed vinyl copy for $40 to a private OK Go concert for $10,000.